“Money for something – not LGBT” – HRW and Ken Roth

But they are not in dire straits for it.

We care about “Human Rights”

Human Rights Watch accepted a sizable donation from a Saudi billionaire shortly after its researchers documented labor abuses at one of the man’s companies, a potential violation of the rights group’s own fundraising guidance.

Human Rights Watch recently returned the gift from Saudi real estate magnate Mohamed Bin Issa Al Jaber, which came with the caveat that it could not be used to support the group’s LGBT advocacy in the Middle East and North Africa. The controversial donation is at the center of a contentious internal debate about the judgment and leadership of Human Rights Watch Executive Director Kenneth Roth.

After The Intercept began investigating the donation, the rights group published a statement on its website saying that accepting the funding was a “deeply regrettable decision” that “stood in stark contrast to our core values and our longstanding commitment to LGBT rights as an integral part of human rights.”

The 2012 grant from Al Jaber’s U.K.-based charitable foundation amounted to $470,000, Roth told The Intercept, adding that a “final pledge installment was never realized.” The statement did not refer to Al Jaber by name, but two Human Rights Watch employees confirmed his identity to The Intercept.

“We also regret that the grant was made by the owner of a company that Human Rights Watch had previously identified as complicit in labor rights abuse,” the group’s statement said.

Roth was himself involved in soliciting the donation, according to an internal Human Rights Watch email sent last month and obtained by The Intercept.

In 2012, Roth signed a memorandum of understanding with Al Jaber containing language that said the gift could not be used for LGBT rights work in the region. He was later pictured next to Al Jaber at a 2013 ceremony to memorialize the funding.

“By accepting a pledge excluding its use for work on a group whose rights we strive to protect, the people involved at Human Rights Watch, Inc. made a serious error in judgment,” Rao and Rimer wrote to staff. “Ken Roth, the most senior person at HRW involved with soliciting this pledge, accepts full responsibility for this mistake.”

Roth also said the fallout from returning the donation has not impacted his management role at Human Rights Watch.

What a vile man.

Looking forward to those LGBTQIA+ filmmakers and film artists issuing a public condemnation of HRW and Roth.

As an aside, did you see the photo of Roth and Al Jaber linked to in the above story? 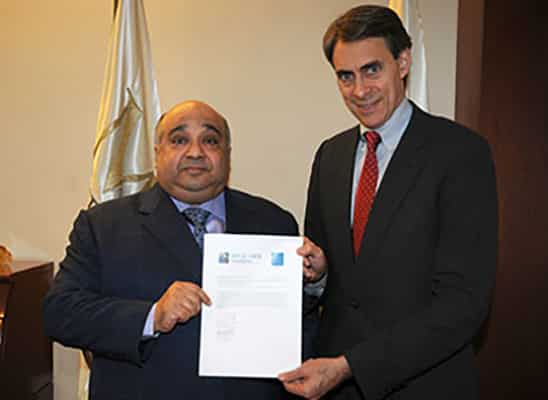 Could Roth look any more sinister? (and I will resist the obvious Jaber joke..)