California State University, Stanislaus has responded to my blog post exposing the antisemitic lie of As’ad AbuKhalil, their professor of political science: 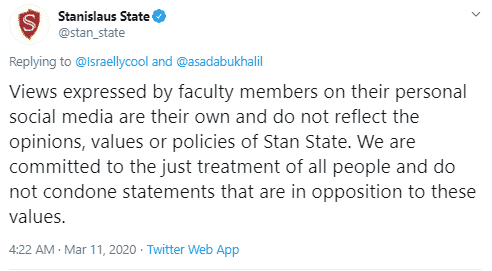 What is not clear to me is what they mean by the last sentence: do they mean that AbuKhalil’s lies about Israel are the “statements that are in opposition to these values” (the just treatment of all people) or were they referring to my tweet exposing him?

I predicted this response. As I wrote in my previous post:

AbuKhalil is careful to write in his Twitter profile “Obviously, my views are my own and not of the university where I teach or the city where I live.” He is doing this because he knows it gives him carte blanche to spread any blood libels he wants.

I support freedom of speech but certainly not where it crosses the line in to racial vilification and inciting violence. Also can the university honestly believe he would treat Israeli students fairly? Rutgers University at least disciplined their antisemitic Professor Michael Chikindas, and removed him from some courses, after I exposed his antisemitism to the world.

Be that as it may, the free marketplace of ideas means we can also spread the truth about this “professor” and discourage people from attending the university where such people have the ability to brainwash students with such lies and hate.