Yesterday I posted about how the Jews who returned to Zion eradicated the malaria problem by draining the swamps, leading to better conditions for all of then Palestine’s inhabitants, including the Arabs.

Today I bring you a JTA report from 1929 about certain proceedings of the Shaw Commission, established to investigate the violent rioting in Palestine in late August 1929, which included the Hebron massacre.

In these particular proceedings, although Mohammed Ragheb, an inspector in the government department of agriculture, complained about the Jews, his complaints are telling. For one, he admits our draining of the swamps was beneficial to all. And secondly, although he complained the Jews were “gobbling up the lands most suitable for orange cultivation,” his testimony shows how the Jews purchased these lands legally. 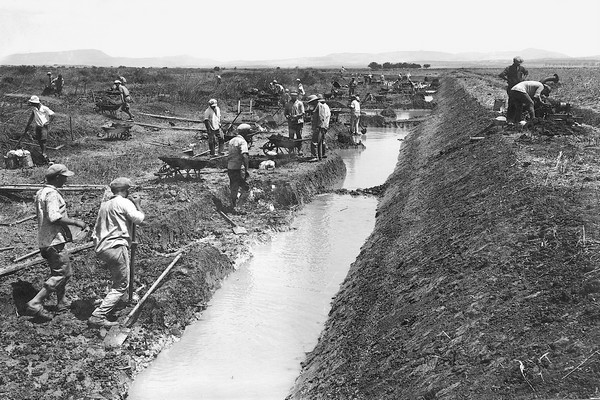 Agreeing that the Jewish settlers take malaria infested swamps, drain them and make them fertile and livable, Mohammed Ragheb, an inspector in the government department of agriculture, a Moslem, and said to have some agricultural experience in Egypt, Austria and Roumania, in his testimony for the Arab side at yesterday’s session of the Commission of Inquiry, charged that not only were the Jews gobbling up the lands most suitable for orange cultivation, but that of the nearly 60,000 acres that can be used for this purpose along the coastal plain from Gaza to Haifa, the Jews have recently acquired about 25,000 acres.

From the figures presented by the witness, Auni Abdul Hadi, of the Arab counsel, moralized in an attempt to prove the well-known complaint against the Jews that they were gradually penetrating the best lands and dispossessing the Arabs. Ragheb’s evidence was similar to that of other Arab witnesses, only he stressed the coastal plain.

Ragheb explained that Palestine’s future from an agricultural point of view depends on the coastal plain which, he said, was passing into the possession of the Jews who are already cultivating 40 percent of the land for citrus growing, and the Arabs are cultivating the remaining 60 percent.

From this evidence, Commissioner Snell deduced that the Arab grievance was that the Jews cultivated citrus fruits where the Arabs formerly grew melons, but the Arab counsel insisted that large Jewish companies, including one backed by Lord Melchett, were buying up large stretches from “small owners.” The Commission got from the witness an admission that the so-called small-land holders owned from 300 to 5,000 dunams of land each. He also admitted that the Wadi Hawareth land, which the Jewish National Fund had bought for a million dollars raised by Canadian Zionists, had belonged to two families, both of them absentee landlords living in Beirut and Jaffa.

The witness declared that Arab ploughmen were obliged to move on to other villages or towns when the Jews bought lands from the Arabs because the new Jewish colonies did not employ Arabs. The fact that the Wadi Hawareth land belonged to a family named Taman came as a distinct surprise to the Commissioners who had been under the impression that it was the property of a number of small owners.

Ragheb lumped the orange lands in the 40-year old colony of Hederah together with newly acquired Jewish land to produce the effect that the Jews had purchased from six to eight thousands of acres suitable for orange growing in the Haifa district from small owners, but he admitted that some of it had been bought from large owners.

Auni, the Arab counsel, caused laughter at the session, by asking the witness if the Jews, whom he claimed already possessed 40,000 dunams in Haifa and Tulkarem districts, which is three-quarters of the total available for citrus cultivation, had not bought half again as much. At this Chairman Shaw smilingly remarked “what would be left to the Arabs.” Ragheb agreed that the Arabs had been most active in the last five or six years in orange cultivation but he mentioned nothing about Jewish influence.

Ragheb continued his instructing of the commission in elementary agriculture and tried to prove that the Jewish settlers were unsuccessful grain cultivators. They were good horticulturists, he said. He produced reports showing the output of grain fell when they took over Plain lands. Betterton drew attention in the same report to the rise, two years later, when Jews got to know the land. Ragheb stated. “The Arab fellah does not use expensive machinery or chemical fertilizers, but he can do well and better with grain land than Jews.” Merriman pointed out that the use of the machinery was justifiable since Jewish output from the land became larger.

Ragheb agreed that Auni had cited the Arab objections when he said they were afraid the government would give vast forest lands free to Jews. He never heard that Jews had asked for these, he admitted.

The testimony continued on semi-economic grounds, Arabs failing to prove their contentions that the Jews were a liability to the land but were rapidly acquiring most of it.

In other words, we purchased land legally, and Arab landowners benefited financially. Yet the Israel-haters like to complain that we stole the land from the Arabs.