Human Rights Watch has come out with a new report, charging that “The Israeli government’s policy of boxing in Palestinian communities extends beyond the West Bank and Gaza to Palestinian towns and villages inside Israel.” There is a lot to unpack – too much for one blog post, without running the risk of boring your socks off – so I want to, in this post at least, focus on one sentence only in the report.

In the early 1920s, the Palestine Jewish Colonization Association, according to Israel’s Foreign Ministry, drained the swamps, from which local residents derived their livelihood herding buffalos and weaving reed mats, to make room for new Jewish settlements.

This makes it sound like the early Jews returning to their homeland drained the swamps just to “make room for new Jewish settlements,” as if the swamps were in the way of building. Furthermore, HRW are implying that our draining of the swamps was a bad thing.

The truth is we drained the swamps to deal with the problem of malaria at the time. And we did so, successfully, benefiting everyone in the land, Jew and Arab alike.

And how big was the malaria problem? Huge.

In 2017, the American Entomologist published a paper entitled Local Malaria Elimination: A Historical Perspective from Palestine 100 Years Ago Informs the Current Way Forward in Sub-Saharan Africa. The entire thing makes for fascinating reading, and I encourage you all to read it. But for now, I will highlight some parts only. 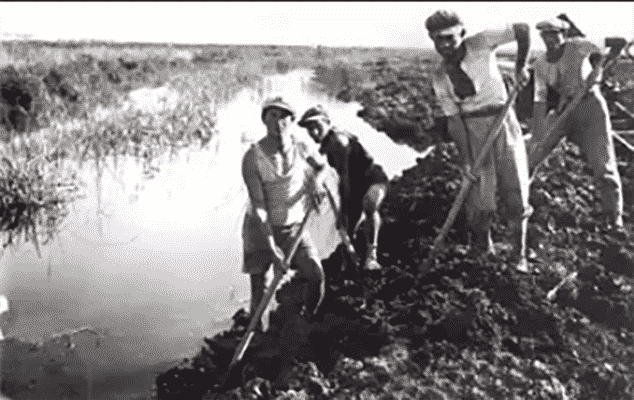 Before World War I, for several centuries, Palestine had been a part of the Ottoman Empire. Palestine was so severely saturated in malaria, it was either uninhabitable in many areas or otherwise very thinly populated. Palestine was described by an officer with Allenby’s army as “one of the most highly malarious countries in the world” (Austen 1919). The disease had decimated the population to the point that Mark Twain in 1867 wrote on his visit to Palestine, “A desolation is here that not even imagination can grace with the pomp of life and action…We never saw a human being on the whole route” (Twain 1869).

In its 1876 Handbook for Palestine and Syria, the travel agent Thomas Cook and Son said of Palestine that “Above all other countries in the world, it is now a land of ruins. In Judea it is hardly an exaggeration to say that…for miles and miles there is no appearance of present life or habitation, except the occasional goatherd on the hillside, or gathering of women at the wells, there is hardly a hill-top of the many within sight which is not covered with the vestiges of some fortress or city of former ages” (Cook and Son 1876).

In 1902, in his report entitled “The Geographical Distribution of Anopheles and Malarial Fever in Upper Palestine,” J. Cropper wrote of Rosh Hanikra (which marked the border between the provinces of Syria and Palestine), “It was guarded by a small company of Turkish soldiers, and the platoon had to be changed every month because malaria sickened and debilitated everyone after 10 days” (Cropper 1902). Between 1882–1914, approximately 75,000 Eastern European Jewish idealists arrived to settle in Palestine (not to be confused with the religious Jews who for centuries came to try to live [and die] in the Holy Land). However, by 1914, about half this number of idealist Jews had died or had left, unable to cope with the severe pestilential conditions.

Our success in eradicating it, benefiting not just Jew, but also Arab, and even the entire world

We therefore tested the hypothesis that because Palestine began as a seemingly insurmountable malarious area that did eradicate malaria without reliance on bednets, adult spray programs, or medication, their story should be a rich source of clues to lead the way forward to eradicate malaria in sub-Saharan Africa.

In 1922, Palestine was to become the place for the first known start of a successful national malaria-eradication campaign anywhere in the world.

Global eradication maps show malaria eliminated by 1970 in North America and Europe, together with Israel, the only country in the Middle East to have eliminated the disease at that time.

Also, villages and settlements came and went, as described in the report of the 1926 Proceedings of the Palestine Health Department Antimalarial Advisory Commission: “There are various records of Circassion, Jewish and German settlements having been ‘wiped out’ or abandoned on account of epidemic malaria, during the thirty years preceding the (1914–1918) war, while in the best watered parts of the country, the numerous ‘tels’ indicating the sites of former Arab villages showed the effect malaria had had in reducing the Arab population” (Palestine Antimalarial Advisory Commission 1926).

Also in 1925, the League of Nations Malaria Commission (part of the equivalent of a WHO of its day) was unanimous in its praise and wrote in its formal report: “All members of the Commission were much impressed with the activity of the Government Health Dept. in relation to anti-malarial work and with its success in enlisting the help of…the voluntary services of the people themselves” (League of Nations [Swellengrebel] 1925). That same League of Nations Commission concluded its report with the observation that the anti-malaria works and methods that they had seen in Palestine “destroyed pessimism, raised hopes” and those involved in this work were “benefactors not only to the Palestinian population but to the world as a whole” (League of Nations [Swellengrebel] 1925).

The tireless work undertaken by the Jews, which involved educating the Arab population, leading to their cooperation in the efforts

There didn’t seem to be a single uniform way to deal with the population other than on a one-to-one basis. Each person had to understand what was the problem; namely, why the works were necessary and why the maintenance was essential. With such a mix of backgrounds and levels of education (or sometimes lack of it), Kligler had to deal with each person individually, at that person’s own pace.

Therefore, in order to ensure that everyone appreciated the problem and thereby hopefully secured the cooperation of the population, Kligler and his team proceeded to engage with the inhabitants as much as possible on a personal, individual basis, rather than rely on intermediary representatives from each different community.

In rural areas, headmen, both Arab and Jewish, were soon with little persuasion turning out squads of villagers and settlers to clear and drain small wadis…in the vicinity of their homes, a procedure which was rapidly developed into an annual seasonal occurrence on the cessation of the spring rains, to a set plan” (Palestine Department of Health 1941).

In 1925, the League of Nations Palestine Malaria Commission reported, “In the beginning of the work, many difficulties were encountered, but by patient instruction and demonstration, most of them were gradually overcome and at present the people, whether urban or rural, Arab or Jew, are ready and willing to carry out requirements of the Medical Officers of Health both in respect of their private premises and on communal lands” (League of Nations [Swellengrebel] 1925).

and the false notion of a distinct “palestinian identity”

Before WWI, several displaced Muslim communities from other parts of the Ottoman Empire, such as Circassians (i.e., probably 1.5–2 million Muslim refugees from the Caucasus, Russia), Algerians, and Bosnians, were periodically introduced and resettled by the Ottoman Empire into the region, including into Palestine. Further, many Egyptians from the Egyptian Army that had invaded Palestine in the 1830s deserted and remained, and while they often maintained their own communities, they received no assistance from the Ottoman Empire with resettlement and sometimes found it easier and more practical to attempt to merge with existing villages.

There was no national identity and no cohesion between the inhabitants other than to their own religion, individual group, or tribe. There was no notion of a Palestinian entity or nation; the population was, as previously mentioned by Kligler in his 1930 textbook, “of mixed peoples, many religions, and all gradations of civilisation” who happened to be in Palestine at that moment.

Indeed, a British Commission in 1929 even commented that for “the last six centuries, Palestine is an artificial conception…Its frontiers, too, are largely artificial…frequented by nomad tribes who by intergovernmental agreement are allowed unhindered passage across these frontiers for the purpose of exercising rights of grazing” (Commission on the Palestine Disturbances 1930).

The 1920 British Foreign Office Handbook for use by the British delegates at the subsequent peace conference noted, “The people west of the Jordan are not Arabs, but only Arab speaking. The bulk of the population are fellahin; that is to say agricultural workers owning land as a village community or working land for the Syrian effendi. In the Gaza district they are mostly of Egyptian origin; elsewhere they are of the most mixed race” (Prothero 1920)

As I said, you should read the entire thing. It makes for amazing reading, especially given this is an academic paper only concerned with the topic of malaria eradication. Yet it shines such a light on the history of Palestine in the early 20th century, dispelling many falsehoods, including that perpetuated by Human Rights Watch in their recent report.