A few days ago, Ayman Safiah, one of the most talented Arab-Israeli dancers in the country, went missing. His body was just found, after he apparently drowned.

A number of anti-Israel sites latched on to the fact that his family were reportedly disappointed with the police efforts to find him – they said the family are the ones leading most of the searches and emergency services were waking up too late – to suggest we spent no time or resources searching for him, and this was because he is not Jewish. 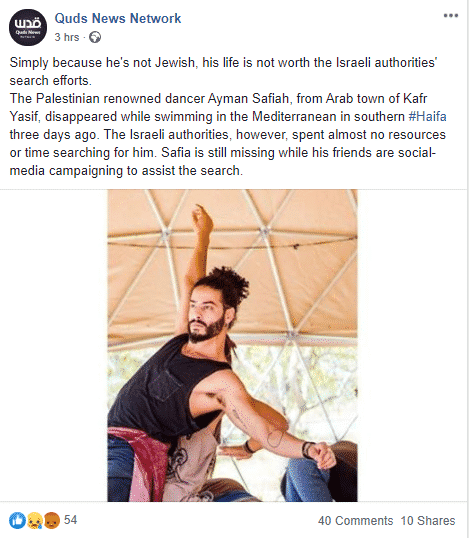 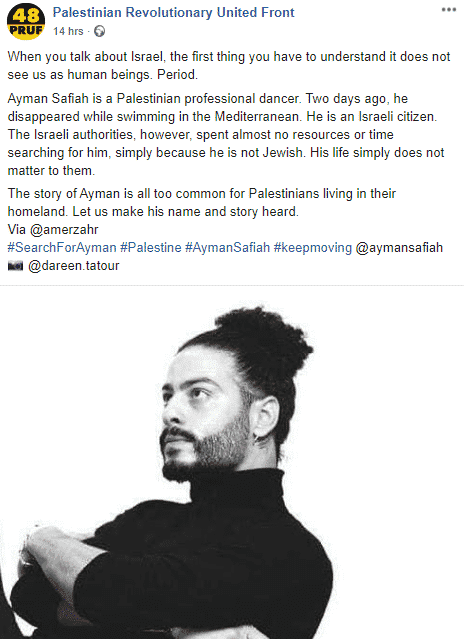 This is a blatant lie.

For a start, police did spend much time and effort in the search.

In a statement Tuesday the Israel Police said it was “investing the best operational forces, resources and technological capabilities to find the missing person.”

Searches had been carried out in the air using a helicopter and drones as well as at sea and by divers, and along beaches in the area, the statement said, adding that police appreciated the efforts of the volunteers who were helping in the search.

Police launched a search for him after he was reported missing and in the following days dozens of friends, family, and volunteers, including divers, have joined the operation.

Even MK Ayman Odeh, leader of the Joint List alliance of predominantly Arab parties (who constantly criticize Israel while enjoying the benefits of living here), would take issue with the vile idea Jews did not look for the non-Jewish Safiah or think of him as a human being.

MK Ayman Odeh, leader of the Joint List alliance of predominantly Arab parties, who had arrived at the scene on Tuesday to watch the searchers and speak with the family, tweeted on Wednesday that “the hundreds of Arab and Jewish volunteers who arrived to support his family prove that his spirit is still with us.”

“I am full of appreciation for the hundreds of young people who came to help search and our hearts are with the Safiah family.”

A relative told Channel 12 news that the family had received concerned messages from people in Israel and abroad, “something that testifies about the person and his character.”

Ayman Safiah began his dance studies at a school in Kibbutz Ga’aton in northern Israel, and was able to pursue his career and teach dance in Israel. He was a valued member of Israeli society and will be sorely missed by Arabs and Jews alike. May his memory be a blessing, and may the Israel-haters who have been trying to exploit his predicament in order to spread libels against the Jewish state, be cursed.