Dubai’s former police chief Dhahi Khalfan who once claimed he received death threats from the Mossad, after leading an investigation that fingered Mossad for killing a Hamashole in Dubai many years ago?

He also once tweeted this 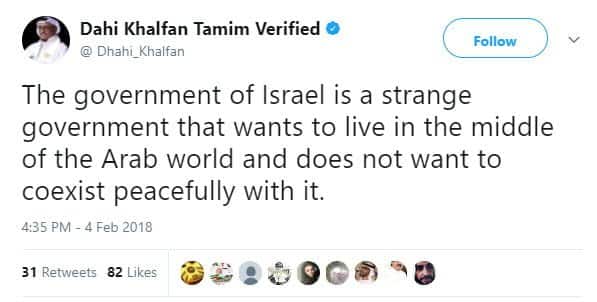 It turns out he has changed his tune, in a big way. 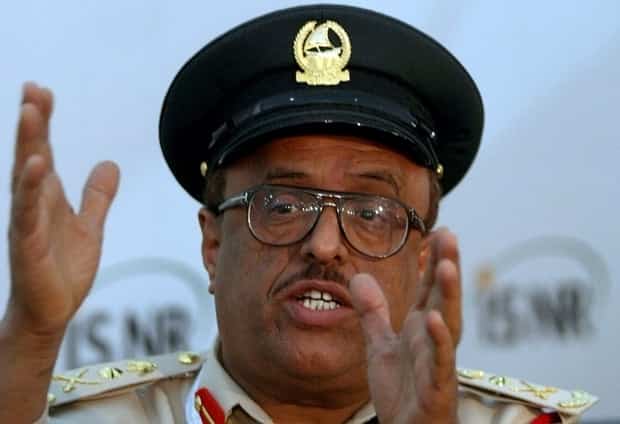 “Instead of saying the Israeli enemy… say the Israeli friend… where’s the problem”, the Emirati official said on Friday.

He added that refusing to recognise Israel lacks logic, saying: “Israel is a country based on knowledge, knowledge, prosperity, and close ties with all the countries of the developed world.”

“Those who do not recognise a state in Israel’s scientific standing, are the Jews originally from Hawaii?”

In a later tweet, Khalfan said that he is ready to visit Israel and would do so before he visits Qatar.

“I declare that I support comprehensive and lasting peace with Israel … If peace happens with Israel and after that reconciliation with Qatar, I will go Israel and I will not visit Qatar even if they say the Kaaba is there,” Khalfan tweeted, adding laughing emojis.

Khalfan’s tweets were met with widespread anger across the Arab world.

In another tweet, he called for the normalization of ties with Israel: “From the moment that the Gulf states normalize their ties with Israel, Qatar’s job as a proxy state for terror organizations will end, including that of Al Jazeera. It’s known that Qatar still supports Hamas and has relations with Israel. So what’s stopping us from having normal ties with them?”

“Israel wants long-term peace and security. I’m in favor. All Arab countries, the emirates, and the Saudi kingdom accept Israel. They want to make peace with Israel. When that happens, Qatar won’t need the fighters in its territory anymore. The war will end.”

Well done Mossad. It seems that memory loss pill you slipped in his hummus has done wonders.

Alternatively, more Arabs in the Gulf states are realizing the truth: Israel is good and they have been backing the wrong horse all this time.