In 1967, following Israel’s victory in the Six Day War, the following commemorative medal was issued, possibly by French-Jewish volunteers in the war effort. 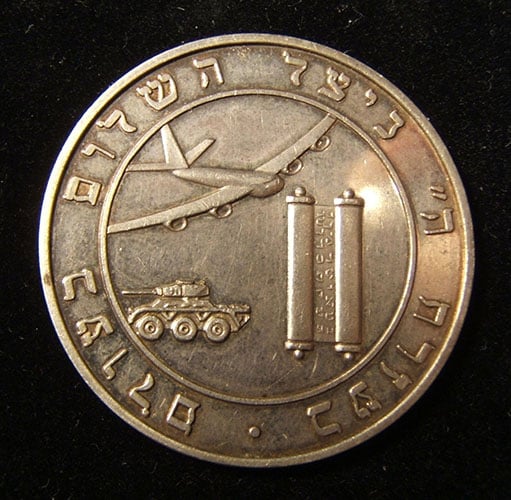 Back: Flag of Israel with sword and olive branch on either side and a variation of the French national motto (“Liberty, Brotherhood, Equality) rendered here as “Freedom, Peace, Brotherhood”, the Hebrew word “Bazak” (“swift”) and “Under the Star of David, Campaign of 6 Days” and the period underneath;

Front: a legend in Hebrew along the edge “With G-d’s Will Was Saved the Peace of the World” with images of a plane, a tank and the Torah.

Naturally, the unhinged antisemites and conspiracy theorists have converted this 1967-issued French-Jewish commemorative medal depicting a plane, tank and Torah in to a 1968-issued Israeli shekel depicting a plane and the Twin Towers.

Yet more proof the Jew haters will see what they want to see…while lying to fit their narrative.

What I don’t understand is if we are this powerful, why aren’t they afraid of us?