10 days ago, celebrity Chelsea Handler posted a clip of antisemite Louis Farrakhan. She subsequently deleted it, following much blow-back, but did not apologize.

At least not publicly. It turns out she did send out an apology – to the Daily Beast – which has only just come to light 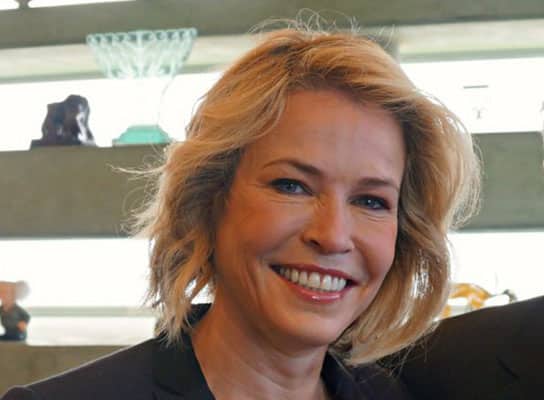 “I thought his message was really powerful,” Handler says. “I wasn’t thinking about the anti-Semitic thing, but I don’t want to take down the post because I felt the message was powerful and a lot of people did.” The post was shared or liked by celebrities including Jessica Chastain, Jennifer Aniston and Michelle Pfeiffer.

Shortly after our conversation, however, Handler decided to take the video down.

“I want to sincerely apologize for posting the video of Louis Farrakhan,” she wrote in an email statement following our podcast taping. “I didn’t consider the context of his Anti-Semitic and homophobic rhetoric, that is of course contrary to my own beliefs and values. Part of the process of educating ourselves during this pivotal time is recognizing and working through our mistakes. This was definitely one of mine. I was wrong. It was offensive, and I apologize.”

While it is good Handler apologized, her apology is a steaming hot pile of horse manure.

If she “didn’t consider the context of his Anti-Semitic and homophobic rhetoric, that is of course contrary to [her] own beliefs and values”, how come when she was forced to consider it following the backlash, she did not apologize immediately, instead doubling down with this comment?

Not to mention “So whatever, you know, everybody can go fuck themselves.”

And why did she not apologize publicly on Instagram, to her 3.9 million followers, instead of the Daily Beast, which only a week or so later revealed her apology? She did, after all, post the Farrakhan clip there.

I see this as less of a sincere apology and more of a “now everybody can get off my back and go fuck themselves” move.