About That “Palestinian” Child Fruit Seller “Own Goal” 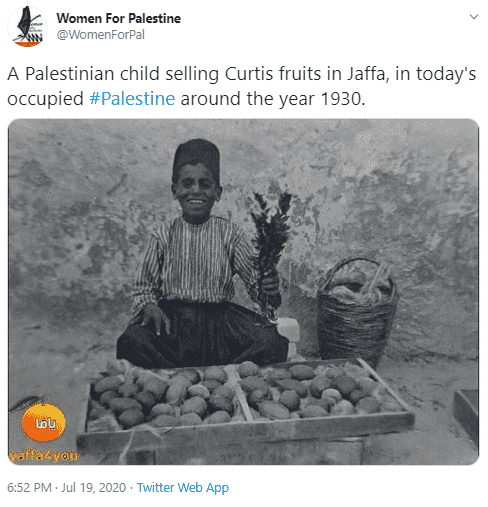 Jews everywhere recognized this to be an “own goal”, since the kid is clearly selling species for the Jewish holiday of Sukkot.

Even Ben Shapiro got in on the act:

Here’s my issue: not one person has provided the source of this photo (I was not able to find it either). So while it seems clear it is a kid selling the species for Sukkot, we do not know exactly who he is or where it was taken.

And even if it is from British-Mandate Palestine, it may be an Arab Muslim kid selling the species to Jews.

Why am I seemingly picking at straws? Because as someone constantly exposing the lies and inaccuracies of the other side, I believe firmly we need to be better than that. We have history and facts on our side after all.

Having said that, this photo is a great “own” goal. Sukkot as a harvest festival is a great reminder of the Jewish connection to the land of Israel since it revolves round the agricultural cycle of the land.

Then there’s this bit of history:

The farmers in Palestine encountered many difficulties in competing with the citron industry abroad. They lacked the knowledge and experience in treating the citron tree – as opposed to the farmers in Italy and Greece who had hundreds of years of experience. The citrons that grew in Palestine were lean and did not look as beautiful as the citrons from abroad. The long journey from Palestine to the markets around the world also affected the merchandise. At this point, an advantage in favor of the Palestinian citrons came in the form of Hovevei Zion. They turned the natural tendency to buy citrons that grew in the Land of Israel to the most important reason for its purchase. Even if the Palestinian citrons looked less beautiful, it was regarded as preferable to observe the Sukkot mitzvah of the four species by using them, rather than citrons from overseas.

In fact, two of the four species (lulav and etrog) were proposed as emblems for the new state of Israel.