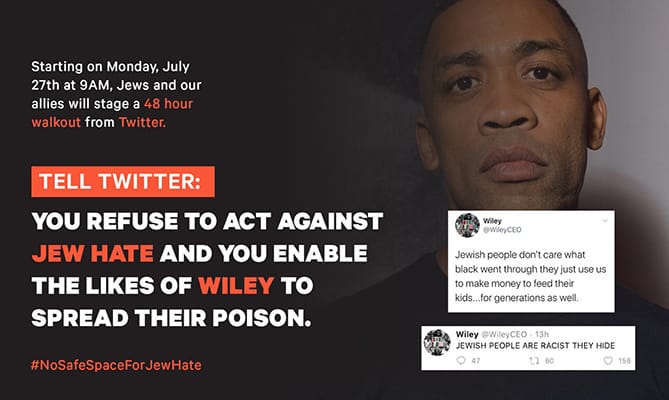 High profile Twitters users, including leading figures in the Jewish community, have announced a 48-hour ‘walkout’ of the social media platform beginning Monday 27 July at 9.00am.

The action follows the inadequate response by Twitter to grime star Wiley’s antisemitic tirade, which started on Friday and by Saturday morning was still ongoing.

Celebrities, politicians and community activists have agreed not to use the Twitter platform as a protest against the failure of Twitter to enforce its own rules and take down Wiley’s account after the grime star broadcast a series of antisemitic tweets to his over 500,000 followers.

Wiley’s is just one of a recent number of high profile and influential Twitter accounts that has incited racial hatred against Jews, receiving an insufficient response from the platform provider. This incident reflects the need for clear legislation, such as the Online Harm Reduction Bill.

“The ‘walkout’ we are announcing today is to show that the Jewish community and its allies have had enough of platforms like Twitter acting as loudspeakers for antisemitism, amplifying the hatred of Jews to millions of other social media users.

As soon as Wiley began posting his antisemitic tweets on Friday Twitter was flooded with requests to have his account taken down. In response Twitter deleted a couple of his tweets and gave the grime star a brief suspension. It was a completely inadequate response.

Unless there is an immediate change in how Twitter operates then there will be further action, including legal action, against the organisation.”

Please join us .@Twitter has allowed @WileyCEO 48 hours of pure race hate. His tweets are still up. @jack has to stick by their remit of anti racism. Silence is complicity. Please walk out with us . No to all race hate . No to platforming any race hate #nosafespaceforjewhate pic.twitter.com/gKFDedjzmM

So many ppl asked @Twitter to stop @WileyCEO from spreading his poisonous antisemitic rhetoric and they did nothing for too long. It is unacceptable #nosafespaceforjewhate pic.twitter.com/5kP4Qdf7fQ

‘The only thing necessary for the triumph of evil is for good people to do nothing.’ #nosafespaceforjewhate pic.twitter.com/AFZXBoyiC3

the first time I raised the issue of racism and hate being hosted on @twitter – directly with the company – was in 2014. @twitter’s inaction over the past few days has been shameful. It’s enough. If you think so too, join us on Monday #nosafespaceforjewhate pic.twitter.com/JlYiwYTjTk

Anyone comfortable with the way Jews everywhere have become the societal whipping boy again should pack up their Humanity Stalls and trade their peace badges. This cannot stand.

I will personally be taking part in the walkout and I encourage you all to do the same.