Yet another link between a so-called palestinian ‘activists’ and actual terrorists is in the news (hat tip: Michal) 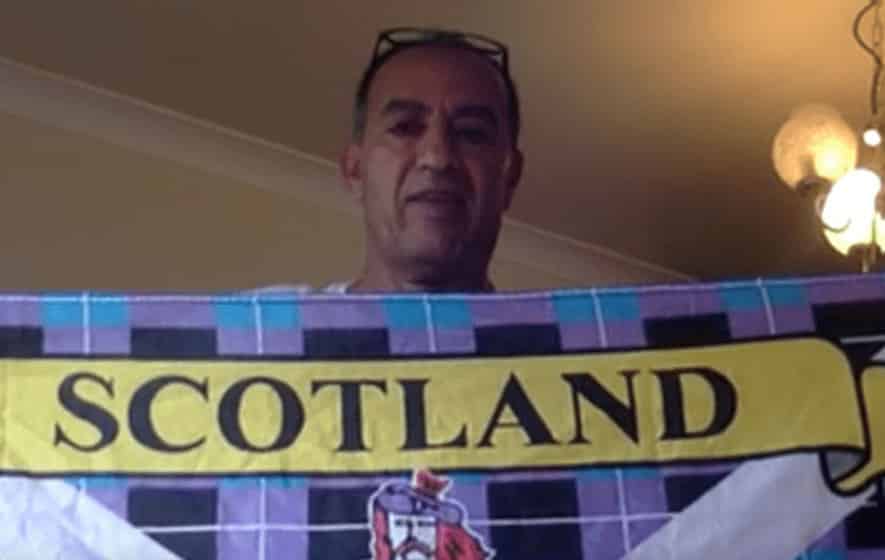 A Palestinian doctor who attended a meeting of alleged members of the New IRA in Omagh was last night charged as part of a police investigation into the activities of the New IRA.

Dr Issam Hijjawi, who is an outspoken activist for Palestinian rights and lives in Edinburgh, is due to appear in court this morning. He is charged with an offence of preparatory acts of terrorism.

Dr Hijjawi is the tenth person to be charged in the PSNI/MI5 investigation ‘Operation Arbacia’.

He was arrested at Heathrow on Saturday as he attempted to leave the UK and transported to Belfast to be questioned at Musgrave PSNI station.

The 62-year-old’s house in the Blackhall area of Edinburgh was also searched by officers from Police Scotland.

Dr Hijjawi, whose family come from the the occupied West Bank, is the chair of the Association of Palestinian Communities in Scotland.

He attended one of the two meetings which were bugged by MI5, along with a number of leading members of the group Saoradh, who it is also alleged are members of the New IRA.

The case centres around an alleged double agent who has since left his home on the outskirts of Belfast.

The man, named in court as Dennis McFadden, booked and paid for houses used in two meetings of what police allege was a gathering of the leadership of the New IRA.

Both houses were bugged with both listening devices and cameras.

Dr Hijjawi, who is represented by Phoenix Law, says he attended the meeting to give an update and political analysis on the current situation in Palestine.

The Belfast based law firm represents seven of the ten people arrested as part of the MI5 sting.

Dr Hijjawi is the only one of the then people arrested who last night remained in police custody.

Here is a reminder as to the deeds of this New IRA group.

Widely regarded as the largest dissident republican terror grouping, the New IRA has been responsible for a series of attempted attacks on police.

In April 2019 one of its gunmen shot dead journalist Lyra McKee as she observed a riot in Derry.

Hijjawi, who also goes by the name Basalat, is claiming “entrapment.”

A Scottish GP is among the latest people to be remanded into custody in Northern Ireland as part of a major police investigation into the New IRA.

Dr Issam Basalat, 62, of Telford Road in Edinburgh, is accused of preparation of terrorist acts in relation to his attendance at an alleged meeting of the New IRA at an address at Buninver Road in Omagh, County Tyrone, on July 19.

A defence lawyer for Basalat set out that his client is a GP based in Scotland who previously chaired the Palestinian Society in Scotland and has addressed the Scottish Parliament.

He said his client had been “pestered” to attend and address a public meeting that he believed had an “exclusively political purpose”, while he was in Northern Ireland to obtain a passport for his daughter in Belfast, and went on to claim that his client had been “entrapped” by an MI5 agent.

I call BS – I don’t think there was any pestering going on. I think he was more than happy to speak to them, given his ties and history with the group.

He also travelled, sometime in 2018 to Lebanon, and its capital Beirut, with leading Tyrone republican Kevin Barry Murphy.

Murphy was one of six people who appeared in court yesterday charged with a number of terrorist related offences, including directing terrorism.

Dr Hijjawi has had a connection with the group for several years and addressed the Saoradh Ard Fheis in Newry last November.

During his talk he spoke of being approached on a number of occasions by MI5, saying: “what they called my Irish connection, ironically admitting the parallel between the Palestinian and Irish causes”.

“Comrades, be assured that we are on the right side of history, whether in Palestine or Ireland, the nearly century-long struggle for freedom, self-determination, dignity and social justice will prevail, and the imperialist, colonialist powers sooner or later will be defeated, it’s just a matter of time”, he added.

Plus the co-defendants cannot even get their story straight.

“There’s absolutely no mention during that meeting of recruitment for the IRA, procurement of weapons for the IRA, or assisting the IRA,” he told the hearing.

“Predominantly the conversation was about Covid and other matters.”

So much for giving “an update and political analysis on the current situation in Palestine.”

But it seems the truth will come out – both video and audio recordings make up part of the prosecution case. And Hijjawi/Basalat may find himself in a lot of trouble.

“The meeting in Edinburgh was part of a series of meetings, culminating in the relationship with foreign governments being progressed.”

At this stage, that trip to Lebanon a few years ago looks mighty suspicious.

Of course, the palestinians and IRA have a long, loving relationship.

Meanwhile, this story from 2015 has not aged well.

A North Lanarkshire school has apologised following complaints about a homework worksheet which labelled Palestinians as “terrorists”.

The handout, given to P7 pupils at New Stevenston Primary School, states “Palestinians feel they have the RIGHT to use terrorism against the Israelis.”

North Lanarkshire Council, which produced the worksheet, said it would ensure that it would no longer be used.

But a Palestinian group said the council had sought to “demonise” them.

Dr Essam Hijjawi, chair of the Association of Palestinian Communities in Scotland, said: “The ‘Separatists’ case study given to children as homework demonstrates a fundamentally flawed reading of history and geography. It flies in the face of countless UN resolutions and shows an ignorance which beggars belief.

“We are calling for the immediate withdrawal of all such materials from Scottish schools, a public apology to the Palestinian community in Scotland, and a meeting with education department officials in North Lanarkshire, with the leader of the council and Scotland’s minister for education.

“We ask that all materials used in schools relating to the teaching of the history of Palestine is discussed between Education Scotland and the Palestinian community.”