Yasser Arafat, former Chairman of the PLO and President of the Palestinian National Authority (and deceased terrorist):

“…my partner in peace”

“In 1992, Rabin was re-elected as prime minister on a platform embracing the Israeli–Palestinian peace process. He signed several historic agreements with the Palestinian leadership as part of the Oslo Accords. In 1994, Rabin won the Nobel Peace Prize together with long-time political fellow Shimon Peres and Palestinian President Yasser Arafat. Rabin also signed a peace treaty with Jordan in 1994. In November 1995, he was assassinated by Israeli extremist named Yigal Amir. Assassinated for trying to make peace on the basis of two States 1967 borders”

“…a courageous leader and recognized statesman.

His earnest efforts to achieve peace in the Middle East are a testament to his vision, which we share, to end the suffering of all the peoples of Arab regions. He defied the prejudices of the past to tackle the most complicated of problems, namely the Palestinian problem, in a forthright manner.”

“…a brother, a colleague and a friend, a man, a soldier who met us on the opposite side of a divide, whom we respected as he respected us, a man I came to know because I realized as he did that we had to cross over the divide, establish the dialogue and strive to leave also for us a legacy that is worthy of him.” 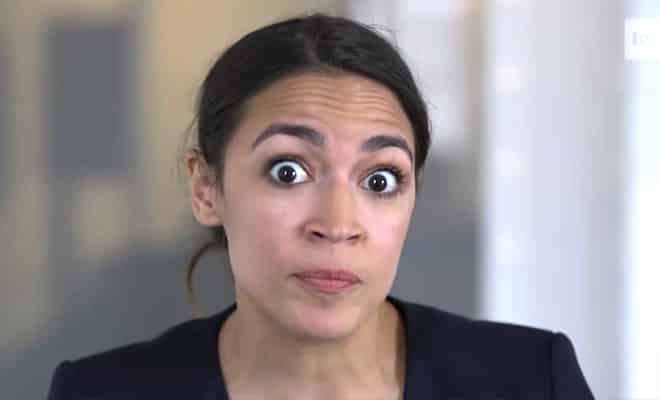 She has caved in to pressure from those who oppose peace but want Israel destroyed, and pulled out of the Americans for Peace Now Rabin memorial event.

Democratic Congresswoman Alexandria Ocasio-Cortez on Friday withdrew her participation from an event commemorating former prime minster Yitzhak Rabin on the 25th anniversary of his assassination.

The decision, which came after backlash from pro-Palestinian activists, was confirmed to The Times of Israel by a spokeswoman for the congresswoman, a rising star in the progressive wing of the Democratic party.

The initial announcement on Thursday indicated Ocasio-Cortez’s willingness to engage with some of the more left-leaning elements of the pro-Israel world in Washington, which had not been the case since she was elected to represent New York’s 14th Congressional District last year.

But the Americans For Peace Now post was quickly ridiculed by pro-Palestinian activists, who called the congresswoman’s decision “disgusting” and showed “total contempt for Palestinian lives” by honoring Rabin.

On Friday evening, following talks with organizers from Americans for Peace Now, the congresswoman’s office confirmed her withdrawal from the event altogether.

The spokeswoman for Ocasio-Cortez’s office declined to elaborate on the decision.

A spokesperson for APN’s Israeli sister organization, Peace Now, called on the congresswoman to take a closer look at the two groups’ social media accounts. “Are you really going to boycott us and all our work with Palestinians to support human rights and an end to the conflict, just because Rabin wasn’t a flawless idle after 5 decades of conflict?” he wrote.

AOC, like her fellow squad members, has shown herself at best to be heavily influenced by haters of Israel and peace, and at worst one of them herself.

Not that all of these haters have been placated.

Read the story I tweeted, which came later. We need an official statement from her, not comments to journalists from spokespeople.

This is her default response whenever she’s called out by the left.

G-d help the Democratic party if she and the squad are its future.

Incidentally, had the opposite occurred, and a politician decided to attend based on lobbying by pro-Israel groups, these same haters would be whining about the immense power of the lobbies.