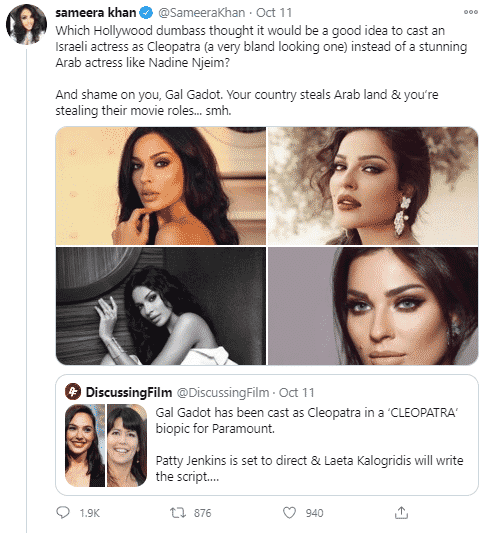 Why the backlash? Remember when the beautiful Elizabeth Taylor held the coveted role of the Cleopatra in the 1963 film by the same name. I hardly think that there was any criticism for the English-American actress. Elizabeth Taylor was even awarded the Guinness World Record for the most costume changes. To this day, when one thinks of Cleopatra, the image of Ms. Taylor is sure to follow. As a matter of act, this one singular role in the historical epic made Elizabeth Taylor more famous than ever before. Elizabeth Taylor was born in England and died in the United States. She was not Egyptian, Muslim, or, for that matter, a Middle Eastern (she did convert to Judaism however – ed.).

I have been simply appalled by the comments flooding Twitter. Comments such as, “I am sick to my stomach. She (Gadot) has no shame” to “Next thing you know She will be asked to play Rosa Parks”. One person even went so far as to say, “Fact is, Israelis like Gal Gadot are trying to replace the people of the Levant. Cultural and physical genocide is racism.”

This is antisemitism plain and simple. Hate speech directed against an actress who has been vocal in her support of the IDF is just the latest example of how antisemitism is raising its ugly head. Are such unfair, and biased standards used to judge other actors and social media icons? I did not feel the same outrage against Penelope Cruz and her husband Javier Bardem who have been vocal in their support of Gaza and the Palestinians. The same for Roger Waters, co-founder of the progressive rock band Pink Floyd. He has been outright against the existence of Israel, and in favor of the BDS movement. He has even gone so far as to ensure that famous performers don’t hold concerts in Israel.

There was a time when the arts were simply that. A way for us to look into the lives of other people, and be transformed into worlds different than our own. But what the Left seems to be forgetting is that a role that an actor or actress plays, is a role that she is portraying. Someone altogether different than who they are. It is a talent possessed by the very few, and one which should be celebrated in all its honorable forms.

The directors of the upcoming movie chose who they thought was the best woman for the role. But that does not seem to be enough for the Left. Quality of one’s skills, the capabilities which one possesses seem irrelevant to the Left because their view of the world is so skewed. And when those opinions and negative ways of thinking are always directed at one group of people, then it is no longer a lapse in judgment or misguided, but should be called out for what it is.