Last week, The Herald of Scotland ran a report about the anti-Israel protest ahead of the Israel-Scotland Euro playoffs soccer match (Israel unfortunately lost on penalties). The report mentioned how members of the New IRA – the terror group linked to the murder of a journalist – would be there, and that organizers would be protesting for the release of Issam Hijjawi, the palestinian doctor charged with preparatory acts of terrorism for meeting with the New IRA.

Then the report was taken down.

Here is what it said: 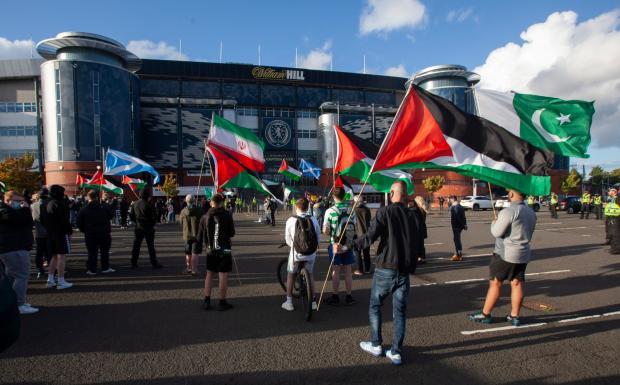 A COALITION OF organisations, including a dissident Irish Republican group linked to the murder of journalist Lyra McKee is gathering outside Hampden tonight in a protest ahead of a key Scotland match.

Members of New IRA political front party Saoradh are among those gathering for a rally at 6pm ahead of the Scotland v Israel match in Glasgow.

They will be part of the Scotland Stand Up coalition, who plan to demonstrate at Hampden Park before the vital Nations League play-off semi final, which acts as a route to reach the Euro 2021.

Police confirmed that they would increase patrols outside the stadium.

Activists were snapped with Palestinian flags and banners at the previous encounter between the teams last month.

They joined members from the Revolutionary Communist Group to demand the release of imprisoned Saoradh members and Palestinian activists.

A social media flier advertising the latest demo said: “On 4 September, our flags, banners and chants of ‘your match is covered in Palestinian blood’ were heard and seen across TV coverage of the Scotland vs Israel nations league match.

“This time we want to make even more noise.

“Join us outside the Scotland vs Israel UEFA qualifier match.

“We will proceed as a group to protest in the car park outside the Main Stand of Hampden Park where there will be plenty of space for physical distancing.

“Bring your friends, placards, flags and megaphones to tell the racist state of Israel and its British imperialist backers to take their knee off Palestinians neck!

“We will again be showing solidarity with political prisoners.”

The organisers said they were also showing solidarity with political prisoners and hunger strikers in Ireland and he former chairman of the Association of Palestinian Communities in Scotland Issam Hijjawi, a Palestinian doctor who allegedly attended a meeting with members of the New IRA in Omagh earlier this year.

He was arrested in August as part of an M15 and PSNI joint-investigation.

Hijjawi, 62, was arrested at Heathrow Airport, and his house in the Blackhall area of Edinburgh was searched.

When reader Michal asked why the report was removed, the Herald said “legal reasons” without elaborating.

Yet the same report has been published by the UK’s Daily Record, where it remains as of the time of this post.

Besides terror-supporters, these protesters also include antisemites and vandals. Naturally.

All of this needs to be reported because it is the truth.

Update: From a similar march a few weeks ago. Note the placard promoting violence, besides “From the River to the Sea” chanting.