Twitter CEO Jack Dorsey Wednesday was grilled for several hours by the Senate Commerce Committee over his platform’s policies regarding hate speech and misinformation, including Holocaust denial and genocidal posts from Iran’s Ayatollah Ali Khamenei.

His responses to Colorado Senator Cory Gardner were telling to say the least.

I asked him about it today at @SenateCommerce. Watch below: pic.twitter.com/Xp3bgU7C99

CORY GARDNER: Mr. Dorsey, I’m going to direct these first questions to you. Mr Dorsey, do you believe the Holocaust really happened? Yes or no.

CORY GARDNER: So you would agree that someone who says the Holocaust may not have happened is spreading misinformation, yes or no.

CORY GARDNER: I appreciate your answers on this, but they surprise me and probably a lot of other Colorads and Americans. After all, Iran’s Ayatollah has done exactly this, questioning the Holocaust. And yet his tweets remain unflagging on Twitter’s platform. You and I agree that moderating your platform makes sense in certain respects.

We don’t want the next terrorist finding inspiration on Twitter or any certain– any platform for that matter. But you’ve also decided to moderate certain content from influential world leaders. And I’d like to understand your decisions to do so a little bit better. Can you name any other instance of Twitter hiding or deleting tweets from heads of state?

JACK DORSEY: Not off the top of my head, but we have many examples across world leaders around the world.

CORY GARDNER: Would you be willing to provide a list of those?

So it’s strange to me that you flag the tweets from the president, but haven’t hidden the Ayatollah’s tweets on Holocaust denial or calls to wipe Israel off the map. And that you can’t recall off the top of your head hidden or deleted tweets from other world leaders. I would appreciate that list. I think it’s important that we all hear that.

So that brings my next question to the front. Does Twitter maintain a formal list of certain accounts that you actively monitor for misinformation?

JACK DORSEY: No, and we don’t have a policy against misinformation. We have a policy against misinformation in three categories, which are manipulated media, public health, specifically COVID, and civic integrity, election interference, and voter suppression. That is all we have policy on for misleading information. We do not have policy or enforcement for any other types of misleading information that you’re mentioning.

CORY GARDNER: So somebody denying the murder of millions of people or instigating violence against a country as a head of state is not categorically falling in any of those three misinformation or other categories Twitter has?

JACK DORSEY: Not misinformation, but we do have other policies around incitement to violence, which may– some of the tweets that you mentioned or the examples that you’re mentioning may fall [INAUDIBLE]. But for misleading information, we’re focused on those three categories only.

CORY GARDNER: So somebody denies the Holocaust has happened is not misinformation?

CORY GARDNER: Millions of people died, and that’s not a violation of Twitter– again, I just don’t understand how you can label a president of the United States. Have you ever taken a tweet down from the Ayatollah?

I assume this is a reflection of the views of Dorsey and others influencing Twitter’s policies, and not because – as his appearance might suggest – Dorsey has been captured by ISIS. 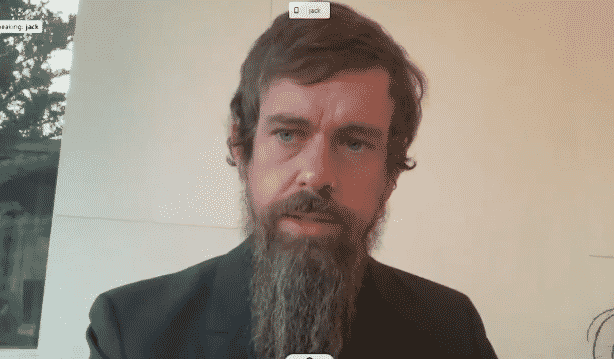 Meanwhile, Khamenei took this as a sign he should continue with the Holocaust denial.