Big news from the world of Chess

Iran’s national chess federation faces being banned from international events over its “racist” policy on players competing against Israel.

A resolution tabled before FIDE’s upcoming General Assembly this week revealed the world governing body of chess is ramping up the pressure on chess chiefs in Iran to allow games to take place.

It follows a series of incidents where Iranian players have been drawn against Israelis and defaulted their games rather than face punishment from the hardline Islamic regime. In some cases, Iranians have pulled out of tournaments entirely because Israeli players were present.

It was tabled by the English Grandmaster Nigel Short, who is a FIDE vice president, and the English Chess Federation delegate Malcolm Pein. The two countrymen have put aside differences stemming from the 2018 FIDE presidential election to unite on the issue.

Short and Pein’s move comes after FIDE fired a public broadside at the ICF in June by publishing on its website correspondence between FIDE President Arkady Dvorkovich and ICF officials.

It showed Dvorkovich had demanded the ICF halt its boycott of Israeli players. But after consulting the country’s hardline rulers, Iran’s chess chiefs responded by simply dodging the issue. 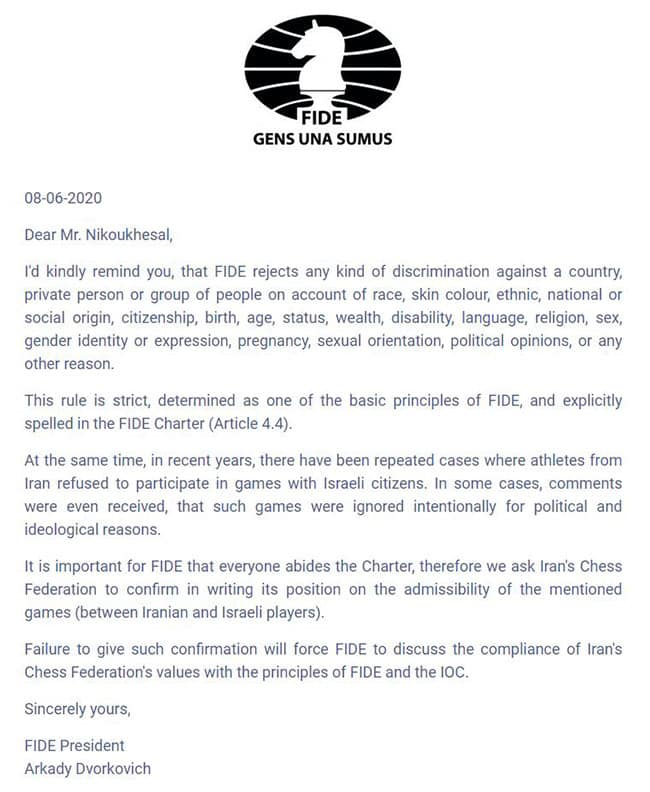 In an interview in the summer, Mr Short told chess24 that Iran is “skating on thin ice” and its policy in chess could have wider repercussions with the International Olympic Committee.

FIDE, particularly under the last administration, has long harboured dreams of the game being included in the Olympics. However, Iran’s policy could scupper that.

Mr Short went on to claim the IOC is following Iran’s actions very closely and its president Thomas Bach has also written to the regime’s sports ministry to demand a change in policy.

“It is flagrant politicisation of the sport and people are being rewarded for non-participation,” said Mr Short, who had a stint employed as Iran’s national team coach from 2006 to 2007.

“All of this is against FIDE and IOC statutes on non-discrimination. But this is not even discreet, it is absolute in-your-face racism.

“They have had about 12 incidents in the last year where Iranian players coming up against Israelis were forced to concede matches or withdraw from tournaments,” he added.

In most sports Iran and Israel don’t come up against each other very often, they would do in judo and wrestling where they are very strong, but most of the time they don’t. But in chess it happens all the time.

There are so many strong Iranian players now there is almost no possibility of avoiding them playing. As soon as they leave the country to play somewhere like Europe, it is basically inevitable.

“The IOC is watching this. Chess is being seen almost like a test case. The Iranians know that legally they cannot stop players competing and they have to pretend somehow that they are following IOC standards, but their way of weaseling out of it is saying they don’t advise players individually. It is a sham, of course.”

Mr Short added: “They know this is not just an issue in chess and they are in danger of being kicked out of the IOC. That could have very serious repercussions for the regime.

“We are ratcheting up the pressure on Iran to comply and if it fails there will be repercussions.”

Now what would be nice to see is other sports following suit.

And yes, I know not everyone considers Chess a sport!