I guess it would be safe to say that former Hamas Representative in Tehran Mustafa Al-Lidawi is not a fan of the LGBTQ community (auto-translation follows): 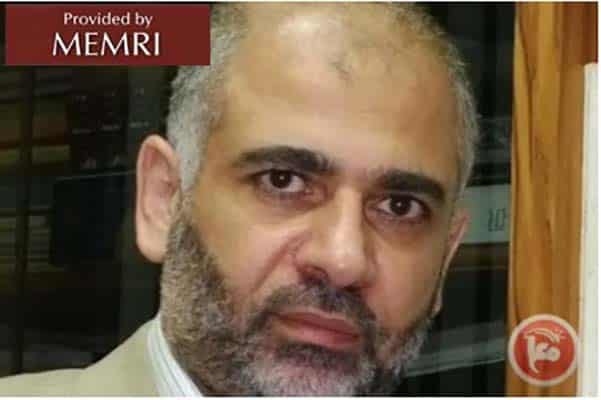 sraeli homosexuals are organizing their ranks and imposing their conditions!

European writers, Eastern and Western, and the great writers of the ancient Russian empire, and other famous international novelists, ancient and modernists, describe them as homosexuals, homosexuals, perverted homosexuals, and filthy fouls, and that they are not normal and abnormal, and that they violate instinct, follow whims, break families, corrupt families, and corrupt families. They destroy well-functioning homes, and with this bad they became famous in the countries of Russia and Eastern Europe, and in America and the general diaspora.

They are the Jews who were shown by Hollywood in its films, and international cinema featured them in its shows, and it shed light on their sick instinct and their insidious mountain, portraying them in their crooked reality and their perverted nature, loving homosexuality and transgenderism, and encouraging and calling for homosexual relations, as they are accustomed to performing scandalous scenes and managing shameful dialogues , Which shows their perverted tendencies, expresses their distorted nature, reveals clearly their rotten psyche, and exposes their stinky truth that they do not hide at times and never deny, as they consider it to be a natural thing without blemish or ashamed of it, and an acceptable human behavior that societies must accept and not object to. And they call for not to bully those who believe in it and those who practice it, or to isolate and reject them, and to discriminate between them and their oppression.

The Israeli homosexuals and homosexual deviants, who are increasing in number and are distinguished by power and influence, and who profess their relationships and are proud of their deviations, organize their ranks and unite their word, have begun to demand the Israeli society to recognize them as one of the respected and appreciated segments of society, to legislate their interrelationships, guarantee their public rights, and respect their personal freedoms. Or to harm them psychologically or physically, and by having to listen to their requests and listen to their needs, and they have become able to bend the necks of politicians, and force the Prime Minister of the Israeli government and party leaders to accept their conditions and accept their requests, otherwise they can use their electoral votes to harm them and vote for others, and change the scene Political in their favor.

The Zionist entity is one of the most suitable countries in the world for homosexuality, transgender people, bisexual people, and legal homosexual cohabitation, as Israeli laws now allow all forms of cohabitation based on consensual contracts registered locally or abroad, and Tel Aviv is described as the most gay-friendly city for both sexes. And it is the gay capital in the Middle East, and it has their own beaches, and institutions that take care of them, and in 2018 its streets witnessed a demonstration in which more than a quarter of a million gays and lesbians participated.

Israeli homosexuals now have trade unions, unions, organizations and institutions that organize their movements, carry out their activities, coordinate their efforts, and assist them in holding conferences, seminars and lectures, and organizing rallies, marches and demonstrations that express their views and defend their rights, and the streets of Tel Aviv and other areas have witnessed rallies that gathered tens of thousands. From them, and attracted hundreds of their likeness and supporters from Israeli and other societies, who became aware of their power and the large number of them, and realize the size of their influence and the extent of their influence, forcing the leaders of political parties to take care of them, defend their beliefs, and protect them from those who oppose their behavior and reject their presence.

Perhaps the Zionist entity’s war minister, Benny Gantz, was one of the most supportive of their movement, and some Israelis even accused him of homosexuality, and that he belonged to these homosexual groups. He called for granting them social aid and housing loans, to enable them to socialize, and to issue some legislations that guarantee the maintenance of their own families, the rights of their non-biological families, as well as the rights of registration and inheritance.

With the exception of the strict religious ones, the Israeli parties are keen to win the loyalty of homosexuals, and to guarantee their electoral votes, because their numbers are large, their spread is wide, their votes are influential, and the influence of some of them is great, and their presence is distinguished, as they have become conscripts and officers in the army, and some of them hold military ranks High, in addition to the fact that the Israeli Knesset has some of them from both genders, and a number of homosexuals participated in the previous and current Israeli governments, who openly declare their homosexuality, and the cohabiting relationships they establish, and use their rankings to pressure the parties to obtain some material and legal gains from them.

It may not matter much to us if the Israeli society accepts homosexuality and homosexuality, or fights and forbids it, for this is a nation that has been known since its inception with these deviant tendencies, and homosexuality has become an inherent characteristic of it and is attached to it. Or social ills, and no harm to societies from such abnormal relationships, and there may come a day when their societies disintegrate, their families disintegrate, their generations corrupt, their offspring will be cut off and their existence ends.

But we are saddened by the fact that these deviant delinquents, perverted transsexuals, homosexuals, homosexuals, and lesbians are the ones who occupy our land, defile our sanctities, wreak havoc and corruption in our country, and overpower us with power and strength, and control our future and determine our destiny, and our nation, which is the best and most honorable of nations. And the noblest of them, they are preoccupied with them and are unable to confront them, but some of them accept recognition of them despite their inferiority and alliance with them, and their support in usurping our rights and conquering our people, and they have forgotten that God Almighty, who has eclipsed the earth with their proverbs, is lying in wait for them. God Almighty repents, or if a thunderbolt descends on them from the sky that kills them, or anger falls on them from the Most Merciful that enrages them, unless they return to the choices of their people and the constants of their nation.

At least he doesn’t subscribe to the idea of “pinkwashing” – he admits that Israel provides the LGBTQ community with rights because we are “one of the most suitable countries in the world for homosexuality, transgender people, bisexual people, and legal homosexual cohabitation.”

He also doesn’t seem to understand just how many palestinian homosexuals there are.

I suggest Queers for Palestine et al. get in touch with him and set him straight (for want of a better word) – preferably in person.