I have written a fair bit about American Muslims for Palestine before. As an antisemitic, terror-supporting group, they would normally love themselves some good hijackers.

Not in this case. 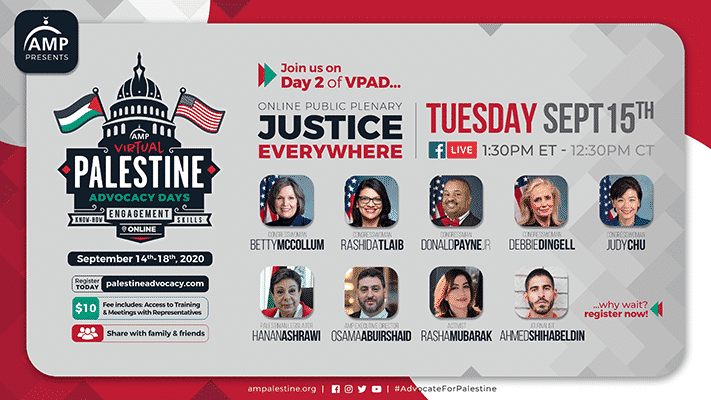 During the week of September 14, American Muslims for Palestine, an extremist pro-Palestinian advocacy group, lobbied members of Congress as part of its virtual “Palestine Advocacy Days.”

However, instead of just hearing from AMP activists who seek to demonize Israel and sabotage recent normalization achievements, several legislative meetings were commandeered by counter-Islamist activists who briefed congressional offices on AMP’s antisemitic and extremist roots.

Associates from the Counter-Islamist Grid, a project of the Middle East Forum, infiltrated AMP’s annual lobby day and redirected the focus of its meetings to emphasize AMP’s radical origins and documented history of anti-Jewish hate. Their sudden and unexpected participation threw AMP’s conference calls into complete disarray, with some of its lobbyists insulting their legislative hosts or prematurely ending their meetings.

This year, thanks to the coronavirus pandemic, AMP was forced to hold its delegate training and legislative meetings in a virtual format, offering concerned counter-Islamists unprecedented access to its event. There was no vetting process for participants, and AMP relied on a single, brief training session to indoctrinate volunteer lobbyists to parrot its views in front of lawmakers.

Prior to these meetings, CIG associates sent constituent letters and spoke with Congressional staff who were scheduled to speak with AMP. These letters cited the Anti-Defamation League, an antisemitism watchdog group that accuses AMP of promoting “extreme anti-Israel views” and providing “a platform for antisemitism under the guise of educating Americans about ‘the just cause of Palestine and the rights of self-determination.’”

Although most offices insisted on meeting with their constituents – apparently no matter how extreme – at least a couple staffers who received CIG letters failed to show up to scheduled teleconferences. In a private chat group, AMP leaders expressed frustration with canceled meetings and unresponsive legislators, and they even complained about an elected official who “hears from Jews in his district on a regular basis.”

Just minutes into its meeting with a legislative aide for Sen. Pat Toomey (R-PA), a CIG infiltrator interrupted AMP’s pitch, pointing out that “AMP is an outgrowth of the Islamic Association of Palestine, a group which served to advance the interests of Hamas, a US-designated terrorist entity.”

Rather than expressing disappointment at the interruption, Toomey’s national security adviser appeared to continue where CIG left off, noting that, “Hamas has not been a suitable partner for peace,” while asserting that Israel is the only democracy in the Middle East.

Exasperated, an AMP lobbyist accused the staffer of spewing “Israeli propaganda” and ignoring the senator’s constituents for refusing to extend the conversation beyond its established half-hour limit.

“Habbeh has referred to Blacks as ‘abeed,’ the Arabic word for slaves,” a CIG associate interrupted. “He has made racist jokes [on social media] about the physical appearance of Somalis and later tweeted that his mother would think he had the AIDS virus if he ever dated a ‘Black girl.’”

Other legislative meetings targeting politicians in Illinois and Virginia followed the same pattern, forcing AMP to defend its bigoted track record instead of discussing its anti-Israel proposals. CIG pointed out how AMP co-founder Rafeeq Jaber described Jews as “the worst kind of people,” who came to Jerusalem “with false pretenses.”

They noted that “speakers at AMP events often express support for armed resistance against Israel,” and that “AMP’s website features writing by known antisemites and conspiracy theorists such as Jeff Gates and Alan Sabrosky.”

A private WhatsApp chat group established by AMP’s Chicago chapter indicated just how disturbed its leaders were at having their advocacy day upended. “Traumatized is the word & I’m furious & done with these Zionist AMERICANS!” an event organizer wrote.

Having concluded their lobby day, AMP members were left to ponder just how deeply their organization was penetrated. “I wonder if the infiltrator is in this chat,” a participant wrote.