Notorious antisemite Tony Greenstein wants everyone to know that it’s not antisemitic to compare Israel to Nazi Germany (contrary to the IHRA working definition of antisemitism). So he’s published a blog post to explain why.

But you needn’t read through the entire rubbish to see that it is rubbish. You might as well just stop at the cartoon – the antisemitic cartoon 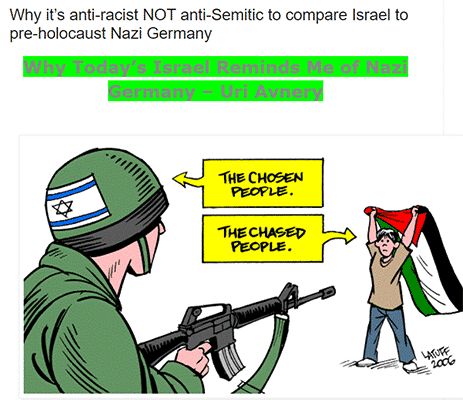 That’s right – for the second time within a week, an anti-Zionist-not-antisemite has posted an antisemitic Latuff cartoon.

It’s as if they are so drawn to his work, they can’t resist posting it, even though it shows them up to be the Jew-haters they deny to be.

Then again, notorious antisemites are notoriously bad at hiding it.