Did Antisemitic Foodbenders Owner Just Announce the Permanent Closure of Her Restaurant?

Kimberly Hawkins, the antisemitic owners of Foodbenders restaurant in Toronto, has published the following on Instagram

Just one hour left for the foodbenders legal defence fundraiser. Thank you all for sharing and supporting. It’s been a huge success thanks to you!

The four legal cases against me hold very serious consequences for free speech in this country. Given the gravity of what’s at stake, I have made the decision to close foodbenders and focus on giving my very best defence in court.

It’s not fair to any of us that my story will be used to test out the IHRA and set precedent intended to silence Palestinian resistance and stop BDS in Canada. It’s not fair the government of Ontario bypassed our democracy to pass bill 168 without hearing your opposition.

The Israel lobby is pinning this all on me and not organizations that represent this cause because they think I’m weak. They think they can isolate me and single me out to make an example that will deter anyone from speaking out again. They thought it was going to be easy.

Kimberly Hawkins, owner of Toronto eatery Foodbenders, has announced on Instagram that she will be closing. Foodbenders is known for posting antisemitic slurs, pro-terrorist, and anti-cop content online while also discriminating against Zionists. pic.twitter.com/4Bs9BuCHI2

.@HonestRepCanada is thrilled to report that the antisemitic Foodbenders will be closing its doors, once and for all, to focus on impending legal cases.

This marks an important victory for the pro-Israel and Canadian Jewish community. pic.twitter.com/COLLjtldxa

but I am not so sure. When I read it, I assumed she meant she was closing it just for the duration of the trial.

Meanwhile, her Launchgood fundraiser – which she described in the post as “a huge success” – ended with her raising about $47,000 of the $100,000 she requested. If that’s a huge success, then she inflated the real amount that she needs. We already know it included $8,500 in a ridiculous attempt to countersue 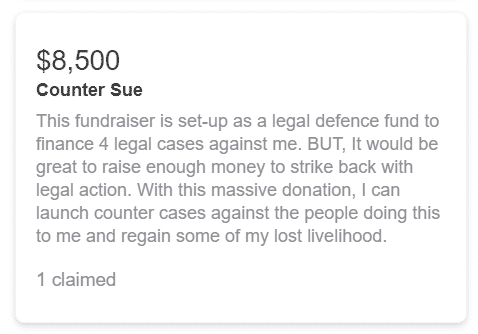 Meanwhile Paypal is blocking payments made to her through their platform.

Here’s hoping this hatemonger does close her doors for good.