As you are all probably all aware,  Republican Congresswoman Marjorie Taylor Greene is nucking futs.

Her various conspiracy theories – including the one where she alleged the 2018 California wildfires were caused by Jewish space lasers(!) – have been roundly condemned by Jews and non-Jews alike.

But that’s not good enough for fellow antisemite Linda Sarsour, who saw Green’s  antisemitism as an opportunity to somehow vindicate her buddies Ilhan Omar and Rashida Tlaib of their antisemitic statements. 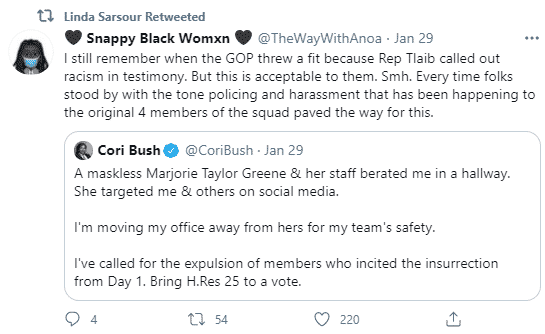 But she didn’t stop there. She then had the chutzpah to claim that those who have criticized the antisemitism of the Left have been silent on Greene.

In other words, instead of unequivocally expressing solidarity with the Jewish community in the face of this antisemitic conspiracy theory, Sarsour sees it as an opportunity to attack proud Jews who speak out against antisemitism.

In any event, it is a blatant lie. Pro-Israel groups have blasted Greene, as have pro-Israel Twitter users who have not only ripped her, but mocked her mercilessly.

One of the common ways has been for some Twitter users to incorporate “Jewish space laser” in their Twitter handle or profile picture. In fact, not long after her previous tweet, Sarsour inadvertently gave an example of this!

As for me, I did not get around to posting about Greene (until now) purely because of outside world obligations (you may have noticed I have not posted as much as usual for the past few days). Rest assured, my track record in exposing Jew haters of all stripes speaks for itself.

But as I have written in the past, I see the antisemitism on the Left as the bigger threat. The vast majority of reasonable people see antisemitic nutcases like Greene as exactly that. Yet way too many people (including Jews) see antisemites like Sarsour, Tlaib and Omar as the good guys.

And trust me, they are not the good guys.