Since then, Boteach has released a bizarre video in which he seems to be trying to stamp his ‘woke’ credentials and, more tellingly, mischaracterizing criticism he has received as opposition to Black-Jewish brotherhood.

Perhaps he did receive such criticism as well, but to ignore valid criticism about plans to honor Alicia Garza – someone responsible for fraying Black-Jewish relations – is disingenuous.

As I’ve made clear, I am very much in support of valid bridging efforts. This, however, seemed to be nothing more than a vanity exercise.

Be that as it may, it seems Boteach won’t be able to avoid the issue now.

And guess who advised her to pull out: 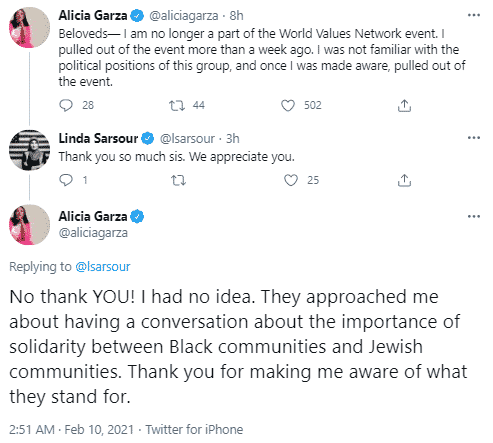 One need not imagine what it was about “what they stand for” that prickled the hairs on Garza’s neck. Clue: What Sarsour finds creepy.

So there you have it: Garza taking advise from an antisemite to rebuff Boteach’s efforts to honor her for…G-d knows what.

At least she has reaffirmed why she was not a worthy honoree to begin with.