Yesterday, I posted how Black Lives Matter co-founder Alicia Garza pulled out of “Bobblehead Rav” Shmuley Boteach‘s  Ninth Annual Champion of Jewish Values International Awards Gala, in which she was to be honored.

It seems she did so because Boteach is a Zionist.

Garza, like many of us, was wondering why Boteach had not adjusted event materials to reflect this.

It seems he has since done so. Quietly and without any kind of announcement or condemnation of her withdrawal.

Here was an opportunity for Boteach to right a wrong, to admit he had erred in planning to honor an Israel-hater and apologist for antisemitism.

Instead, he took the cowards way out.

And don’t tell me he didn’t have time to post about it. He found the time to honor infamous pornographer Larry Flynt. 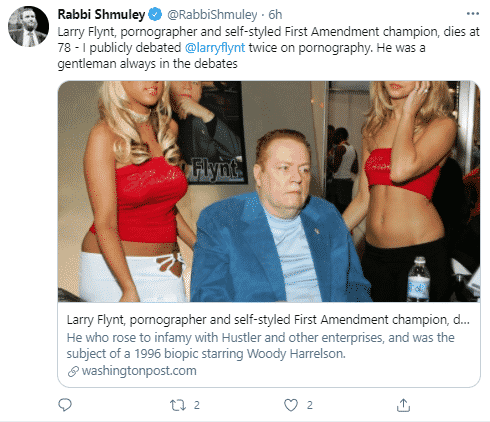 This was one of about eight tweets and posts about Flynt.