Remember how Marc Lamont Hill issued an “apology” following his firing from CNN for calling for a “free Palestine from the river to the sea”?

This is part of the “apology”:

Many have focused specifically on my final remark, which said that justice required a “free Palestine, from the river to the sea.” Critics of this phrase have suggested that I was calling for violence against Jewish people. In all honesty, I was stunned, and saddened, that this was the response.

My use of “river to the sea” was an invocation of a long history of political actors – liberal and radical, Palestinian and Israeli – who have called for their particular vision of justice in the area from the Jordan River to the Mediterranean Sea. For many, justice will come from a two-state solution. For some, like me, justice will come through a single bi-national democratic state that encompasses Israel, the West Bank, and Gaza. I strongly believe that this is the best method to achieve peace, safety, security, and self-determination for both Israelis and Palestinians. Justice requires that everyone, not just a single side, is free and equal.

Throughout my speech, I spoke explicitly about the need for Israeli political reform, specifically as it pertains to Arab citizens of Israel. I also called for a redrawing of borders to the pre-1967 lines, as well as a greater attention to human rights for those living in the West Bank and Gaza. At the time, I believed that these demands made in the speech sufficiently reflected my belief in radical change within Israel, not a desire for its destruction.

Clearly, they did not.

I take seriously the voices of so many Jewish brothers and sisters, who have interpreted my remarks as a call to or endorsement of violence. Rather than hearing a political solution, many heard a dog-whistle that conjured a long and deep history of violence against Jewish people. Although this was the furthest thing from my intent, those particular words clearly caused confusion, anger, fear, and other forms of harm. For that, I am deeply sorry.

As a communicator, I must take responsibility for the reception of my message. In this case, the final words of my speech became a dangerous and harmful distraction from my political analysis. Rather than talking about the plight of Palestinians, or engaging in tough but necessary conversations about a positive and successful way forward for both parties, the bulk of the conversation has been about my choice of words. To this extent, I did no favors to Israelis or Palestinians. For this too, I am deeply sorry.

At the time I wrote:

I don’t think Hill is sorry for what he said. He is sorry his career took a hit because of it.

Over time, Lamont Hill is proving me correct. The latest example is how he just retweeted this: 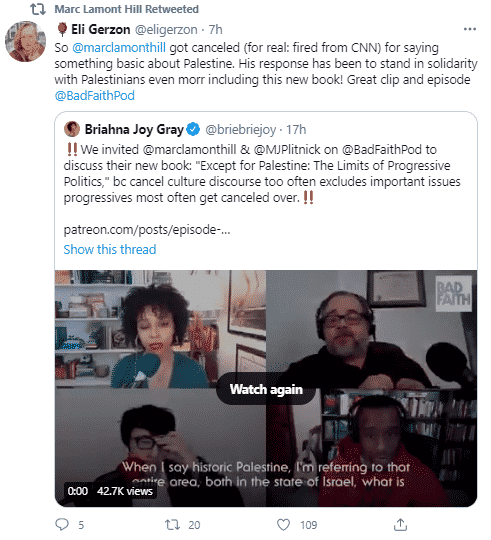 So his uttering these words – which he acknowledged could be interpreted as a “dog-whistle that conjured a long and deep history of violence against Jewish people” – were really just him “saying something basic about Palestine”? So much for taking “seriously the voices of so many Jewish brothers and sisters, who have interpreted my remarks as a call to or endorsement of violence.”

By the way, here is the clip from the appropriately named Bad Faith Podcast:

‼️We invited @marclamonthill & @MJPlitnick on @BadFaithPod to discuss their new book: "Except for Palestine: The Limits of Progressive Politics," bc cancel culture discourse too often excludes important issues progressives most often get canceled over.‼️https://t.co/zgW1jfeNpv pic.twitter.com/Bk2QQczhjG

Note what Lamont Hill claims he wants: while he says it is ultimately up to Israelis and palestinian Arabs to decide what they want, he favors a one-state solution, one person, one vote, secular democracy – as well as the palestinian right of return.

If the so-called palestinian right of return is allowed, approximately 5 million “UNRWA-definition” refugees (that includes the descendants of refugee males) would flood Israel. ‘One vote one person’ would not bode well for the Jewish people at all.

Not only that, but even if you think the majority of palestinian Arabs would want a secular democracy, there is no way the likes of Hamas and other Islamic fundamentalist groups would; they would not even tolerate any living Jews on the land.

True, he adds there should be “provisions in place to ensure Israel remains a safe haven for the Jewish people”, but what does that even mean? That the palestinian Arabs would allow a Jewish right of return? No way that will ever happen.

In other words, Lamont Hill’s ‘solution’ is more than just entirely unhelpful, impractical and unworkable. It is a final solution.

Lamont Hill portrays himself as some kind of Middle East expert – so he either knows what I just said is true or he is ignorant to this reality. Disingenuous or a fraud, take your pick.

I believe he knows full well what would happen. Does this sound like someone not calling for harm to the Jewish people?