Following on from parts 1 and 2. 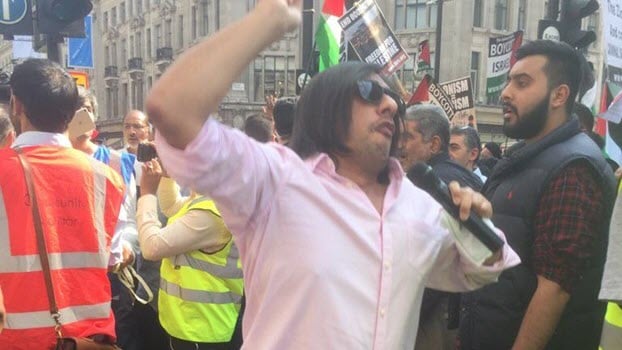 The Committee hearing also exhibited a lack of awareness about colloquial terms like “Khazars” or “European alleged Jews” slurs which are routinely bandied about by Islamists as derogatory euphemisms for Ashkenazi Jews. One of the incendiary statements Ali made at the Al Quds Day hate-fest was this one:

“Zionists are occupying Regent Street, it’s in their genes – European alleged Jews. Remember brothers and sisters, Zionists are not Jews.”

Here, Ali was referring to the myth which claims Ashkenazi Jews descend from Khazar converts. Challenged, Ali claimed that he could not recall exactly but may have heard this from Rabbi Beck of the Neturei Karta. But this sounds like a sly attempt to conflate this statement with ones the Neturei Karta routinely spew about Zionism being a heresy, the group have never made claims questioning the genealogy of European Jews. The agenda here is fuelled by replacement theology.

As far as Jews and Israel are concerned there is not much difference between Sunni and Shi’ite replacement theology. Both Islamic sects have numerous offshoots some of which teach that Muslims replaced the Jews as God’s emissaries and therefore inherit the sovereign rights to Biblical Israel. All the Prophets – including Jesus and Moses – were Muslims.  Islamists will aside intra-Islam rivalries to agitate against Zionists, particularly in the West. This is particularly so where the eschatological narrative of the Muslim Jesus returning to fight a battle in which rocks and stones call out to kill Jews after which he establishes a caliphate before being buried in Mecca will have zero credibility in the Christian West. An alternative method of demonising Israel has to be sought, and therefore any fairy story that discredits Jewish ties to Israel is eagerly seized upon and propagated. Ashkenazi Jews, in particular, rouse the ire of Islamists because they were successful in creating a state in historic Israel. Just as it is difficult for some Christians who believe in replacement theology to accept a sovereign Jewish Israel (for example, Stephen Sizer’s flock), the same is true of Islamists.

The term “European Alleged Jews” can be better understood with excerpts illustrating its usage. The Tehran Times which is the official English language mouthpiece of the Mullah’s in Iran has this:

Israelis don’t just want to get all of Palestine, they also want to get the entire area, including Africa, west Atlantic Ocean passing for the Mediterranean Sea and the Persian Gulf including the Arabic Peninsula – Iran and that makes sense given the recent wars in this zone.
Palestine citizens believe these Jews aren’t Semitic; they are just from Ashkenazic origins. In ancient times they used to live in the eastern part of the Khazar territories (later, the same territories were part of the Russian Empire). Afterward, they moved to West Asia and Africa, Egypt, and Palestine, reaching the rest of the East. In 1934, Stalin created the Hebraists region Oblast with the capital of Birobidzhan, instead of around the 16th century AC the Jews got the UK, just kicking out the Catholics and in recent centuries, they got all of the West and now they have the rest of the world.

Basically they are located in all states along with their Zionist mafia.

Popular Islamic forums like Ummah.com one are filled with discussions like The True Israelites and Bible, Jews and Zionism:

A well-known Shi’a forum tells of “…white “Khazars” who have usurped the real Jews!” and here is a gem from Muslim Villa which reveals sentiments no less hostile towards Mizrachi Jews – but the latter are suitably docile now whereas those upstart Ashkenazim need to be cut down to their proper dhamma size:

From Gawahar.com, the self-explanatory titled thread “You Have No Claim To The Holy Land” does not beat about the bush:

But there is a further issue, which also (yet again!) demonstrates the fundamentally questionable foundations of Zionism.

Jews are actually not even the modern descendents of the israel of the Biblical Old Testament:

According to both the early-20th-century popular historian H.G.Wells and the Hungarian-Jewish intellectual and author Arthur Koestler, amongst numerous others, the people known today as Jews are primarily the descendents of a Turkish tribe known as the Khazars. The Khazars have no historical connection to Palestine. They converted to Judaism between 620 and 740AD, and have no genetic connection to biblical israel, and hence to the narratives of the Bible and the “Holy Land”. Koestler actually devoted an entire book called The Thirteenth Tribe (1976) [ZIP file, 471 KB] to the fact that the Jews of eastern European origin, who are known as the Ashkenazi Jews and who make up about 95% of the Jewish population of today, are of Khazar origin. In other words — virtually all of the Jews of the modern world have no Hebrew ancestry, and no ancient connection with Palestine.

When Nazim Ali was shouting ‘European alleged Jews’, this is to what in all likelihood he was really referring. Rabbi Beck was merely being exploited. Moreover, the Neturei Karta are Ashkenazi Jews themselves which is probably all the more reason Ali resorted to this duplicity. After all, he provided a character reference from a Neturei Karta member which he hoped would exonerate him from charges of antisemitism!

The above examples are but a drop in the ocean. There are countless websites and forums in the Muslim blogosphere regurgitating similarly themed content.