Know Your History: Eleanor Roosevelt on the Palestinian Arab-Israeli Conflict 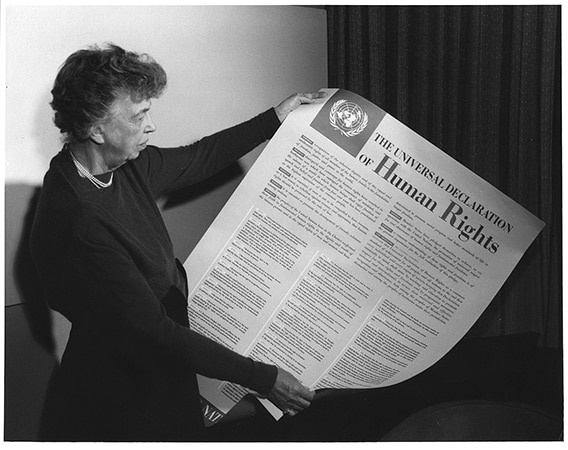 Six days a week, from 1935 to 1962, Eleanor Roosevelt wrote “My Day” a syndicated daily newspaper column that reached millions of Americans. She wrote about many things and evaded many others.

Eleanor Roosevelt’s biographer Blanche Wiesen Cook describes herself as “curled in agony” while struggling to understand Eleanor’s “grievous and prolonged” five-year silence on Hitler’s treatment of all those in his category of ‘lives not worth living.”

So, it was surprising to find five references to Haj Amin El Husseini, the Grand Mufti of Jerusalem, in the musings of Mrs. Roosevelt.

Beginning in 1956, Roosevelt writes about the Mufti’s role in the creation of Israel, calling on his own people to leave until after the Arab armies drove the Jews in to the sea. She also mentions, among other things:

NEW YORK—I have an anonymous letter which asks me what is being done by the United Nations about the plight of the nearly one million Arab refugees of Israel aggression.
Isn’t it astonishing how many mistakes can creep into one sentence.

There are 800,000 refugees who are being cared for by the U.N. and have been cared for since, during the war, their own Moslem mufti in Jerusalem called upon the Arabs in Israel to leave.

Israel was not the aggressor in this war. The Arabs were the aggressors. The partition of Palestine and the creation of the State of Israel was the result of U.N. action.

The Arabs did not accept the new state. So Israel fought and gained more land, holding it by defeating her Arab attackers.

The Arabs who did not heed the call of the Mufti and leave Israel during the war are still living there. As a minority, they have certain grievances. But, by and large, with eight representatives in the Knesset (the parliament), they have a voice, as citizens of Israel, to demand redress for their wrongs.

No one can blame the poor people who left Israel. They were told that in a few weeks they would be back and would receive not only their own land and belongings but that of the Israelis, who would be driven into the sea.

Unfortunately for the Arabs, this did not come to pass. Israel remained a state and those poor refugees were the saddest and most miserable people I have seen in any refugee camps.

The worst of their plight was that, being in Arab countries where they didn’t want to feel they were permanently settled, they were not even allowed to find jobs to keep up their skills, to set up work within the refugee camps for this purpose or to train young people.

Whenever a few people were settled and left the camp, people seeped in from the desert overnight. This was because the food in these camps was better than what they could obtain through their own efforts outside. This sounds incredible, but the head of the authority, who was an American, told me this when I visited these camps.

So the United Nations has done all it could to care for these people, who are victims of the Arab government’s decision that they should leave Israel. Every effort should be made now to resettle those who can return to Israel. The rest should be indemnified and settled where they are needed in Arab countries.

In large part, these people’s homes in Israel have disappeared and their possessions are no longer there. The face of the land has changed because Israel has taken in thousands of refugees from other Arab countries who now occupy most of the land.

I was never so sorry for any refugees in my life as I was for these poor people. But war always brings hardships and injustices and people always suffer for what governments have done.

The Israelis did not instigate aggression and they did win that war.

The most friendly things that have been said concerning the Arabs appeared in an editorial in Life Magazine last week and I suggest the sender of this letter read that editorial. Then he will recognize the fact that both Arabs and Israelis have made many mistakes, both are the friends of the U.S. as far as we are concerned, but that the basic mistake is that the U.N.’s creation of the state of Israel was not accepted by the Arabs from the start. It will have to be accepted in the long run.

In the meantime, much has been lost that might have gone into constructive improvement of the life of the people in Israel and the Arab states. And refugee camps still are not wiped out.