When it comes to biting the hand that feeds them, the palestinian Arabs are at the top of their game. And it would seem some of the most delicious game are Israeli human rights organizations, which spend so much time stabbing their own people in the back (figuratively speaking) while enabling the palestinian Arabs to do so literally.

The latest example of this is a piece entitled How Israeli rights groups prevent Palestinians from framing their own reality. It has to be seen to be believed. Here are some excerpts:

In recent years, people of colour working in the human rights and international development sector have called on NGOs and agencies to examine institutional racism, and to look at how their structures, discourses and programmes reinforce colonialism and white supremacy.

But this emerging global conversation appears to have skipped over Israeli human rights organisations, still praised for their courageous fight against Israel’s occupation and their advocacy of Palestinian rights. The recent report from B’Tselem, which declared Israel to be an apartheid state, offers an opportunity to speak about the racial politics of Israeli human rights work.

Some Israeli rights organisations are not only imbued in the settler-colonial system and benefit from it, but they also embody and reproduce in their institutional structures and operations, racial colonial power relations. Put more bluntly, the Israeli human rights sector has an Ashkenazi Jewish-Israeli supremacy problem. 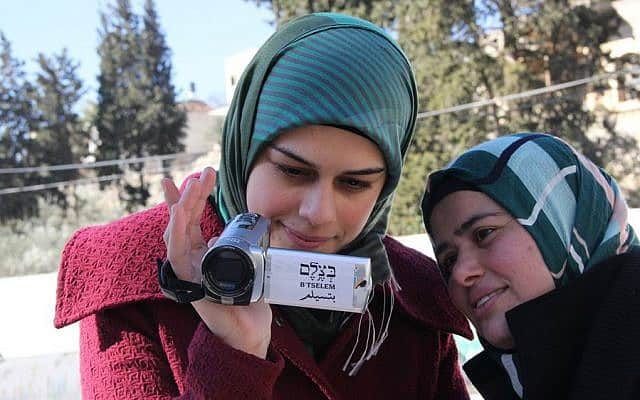 Some unhappy, subjugated victims of the power structures in Israeli human rights organizations (B’Tselem/CC BY 4.0)

As in Israel’s racialised labour market, Israeli human rights organisations have their own glass ceiling. Palestinians are designated specific roles, without which the Israeli Jewish human rights groups cannot operate – yet, even though they are the backbone of these organisations, they are barred from top-level positions, which are mostly reserved for Ashkenazi Jews.

The deep-seated racism – and racism does not have to be conscious or intentional – that underpins this staffing culture also underscores questions of knowledge production and representation. In these organisations, Palestinians and their experiences of settler-colonial violence are instrumental for Israeli knowledge production. They are the source of information, and their lived experiences are the raw dataset.

It is the Israelis who decide what to do with this information, how to interpret and frame it, and how to communicate it to the world.;

An important aspect of this exploitative, racialised relationship is the emotional and psychological labour expended by Palestinians in collecting the information and testimonies necessary for the existence of these organisations.

While Palestinians are tasked with documenting and processing the horrifying settler-colonial violence to which they are subjected, Israeli staff receive processed and “clean” information to use in their reports, international advocacy work and public campaigns.

While this dynamic traps Palestinians in a cycle of violence that leaves them emotionally and politically exhausted and (re)traumatised, it shields the occupier from any direct involvement. Israeli staff receive the testimonies filtered and mediated, adding a further layer of disconnect between the occupier and the consequences of the occupation and colonial violence.

Israeli human rights organisations, activists and lawyers do not merely “use their privilege” to “help” Palestinians – a claim white people often make when they centre themselves. They speak of apartheid, but they do not work to undermine the politics that privilege them. Instead, they capitalise on and benefit from the politics that render Israeli voices as more valuable and legitimate – and they do so while exploiting Palestinian knowledge and labour.

Read the entire thing. Seriously. It is truly captivating to read something so Woke and devoid of reality, while at the same time almost typical of what we see from the Woking Dead and some palestinian Arab circles.

And just to put the cherry on top, one of the co-authors is Haneen Maikey, described as “a feminist queer community organizer, co-founder and former director of the national Palestinian LGBTQ grassroots organization ‘alQaws for Sexual and Gender Diversity in Palestinian Society’”. That’s right – someone who co-founded a queer palestinian Arab organization that will only hold protests in “apartheid” Israel because we all know what would happen if they tried to pull that sh*t in the palestinian controlled territories.