Palestinian Propaganda Fail of the Day: The Gay Protest

+972, a site that misses no opportunity to bash Israel, posted a report about a protest organized by the “queer palestinian community” (hat tip: Uri). 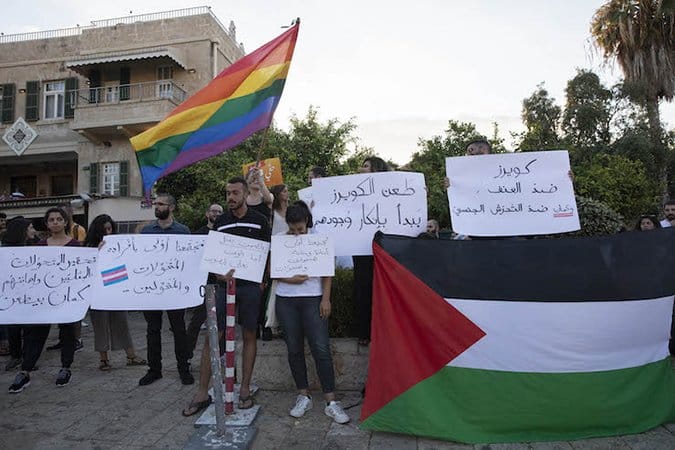 The queer Palestinian community organized an unprecedented protest in Haifa on Thursday, as approximately 200 demonstrators arrived at the German Colony, a central area in the city, to protest violence targeting the LGBT community.

The protest was organized in response to the stabbing of a transgender teen from Tamra, a Palestinian city in northern Israel, outside a shelter for LGBT youth in Tel Aviv last week.

“This is a historic moment,” said Widad Assaf, a Palestinian activist at the protest. “Violence against LGBT people occurs all the time, but it took time for people to take to the streets. We hope this won’t stop here,” she added.

“This is the first-ever protest of the queer Palestinian movement, based on the principles of an intersectional struggle between queer-Palestinian struggles and struggles against the occupation,” said Rula Khalaileh, an organizer with the “Women Against Violence” organization.

“I am pleased with the turnout,” said Jawarah, an activist with the LGBT community. This is the first time that the queer Palestinian community goes out to protest in his 10 years of organizing for LGBT rights, he said. Although Palestinian society can be “close-minded and a bit intolerant of LGBT people,” that a teenager was attacked by his own family members for his sexual identity is rare, he added.

Yup, the “first-ever protest of the queer Palestinian movement.

Which they had to hold in Israel.

In response to an Arab victim stabbed by his own brother.

In other words, try as they may – and boy, did they try

“The protest represents a voice calling for liberation without restraints – not of the occupiers, and not of the patriarchy. It’s important to show support for all LGBT Palestinians.”

this protest could only happen in Israel and nowhere else in the entire Middle East, let alone the palestinian-controlled territories.

Not that the victim was a palestinian Arab as they claim. Tamra is within Israel, and is an Arab-Israeli city, famous for its dairy.

But it is +972 and others trying to milk it as some kind of positive for the palestinian Arabs and blight on Israel.