In English, if someone is referred to as a Philistine, it is someone with bad table manners, or a lazy person who sits in front of the TV drinking beer who has never picked up a book in their life. The misnomer is Philistines were rude and uneducated.

Nothing could be further from the truth. 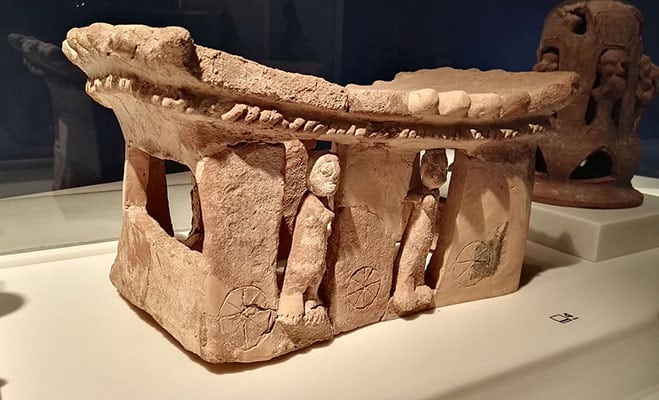 Bukvoed, CC BY 4.0, via Wikimedia Commons

The Philistines first appear in Canaan about 3,200 years ago as part of a migration of Sea People coming from Crete. The Tanakh names five of their cities, situated on, or near, the coast: Gaza, Ashkelon, Ashdod, Gath and Ekron. The Israelites on the other hand, settled on the central mountain ridge which explains the presence of fortresses in the foothills built to protect Jerusalem from invaders coming from the West.

Ancient historical periods are defined by archeologists by the material used at that time. It is the Stone Age because they used stone, the Bronze Age because they used bronze, and so on. A very advanced society, the Philistines developed the use of iron and ushered in the Iron Age to the Land of Milk and Honey. Iron was the advanced and new technology. It was the 5G of the day. Harder than bronze, it gave them the upper hand in warfare and life.

Several excavations have been conducted to uncover the culture of the Philistines. Among them, Beit Shemesh, where an ancient iron factory was discovered. The most astonishing of all was Gath, one of the largest archeological Biblical tells ever discovered in Israel.
The most famous person to come from Gath was Goliath. His name is a derivative of the word Gath. In the ancient city an inscription was discovered with two names reminiscent of his name. The inscription is dated from 950 BCE, which archeologists and historians date as the battle between the giant and the young, future King David.

Initial finds at the site were remains of monumental fortifications and what could be two huge gates. In addition, a man-made trench was discovered which surrounds the whole city and bears witness to the eventual defeat of Gath. Eight meters wide and more than five meters deep, archeologist believe it was set up by a besieging army to stop the Philistines escaping. The trench has been accurately dated to the Aramean siege mentioned in the second book of Kings. The discovery not only corroborates with the Biblical text, it is the earliest siege system ever discovered.

There is also evidence of houses that collapsed when the city was set on fire. Yet the fire, no less, sealed and preserved some objects within the rubble. Pottery of all kinds of shapes and colors was discovered which were vessels for storage, cooking, serving, and cultic rituals.

Because cultures tend to rub off on each other, these discoveries don’t only shed light on the Philistine culture, they also show us what every day life was like during that period in Biblical Canaan. Although there is still so much to discover, it is safe to say that the Philistines were far from a bunch of crass and idiotic riffraff. Without a doubt, they were the hitech of the times.