Not By Bread Alone 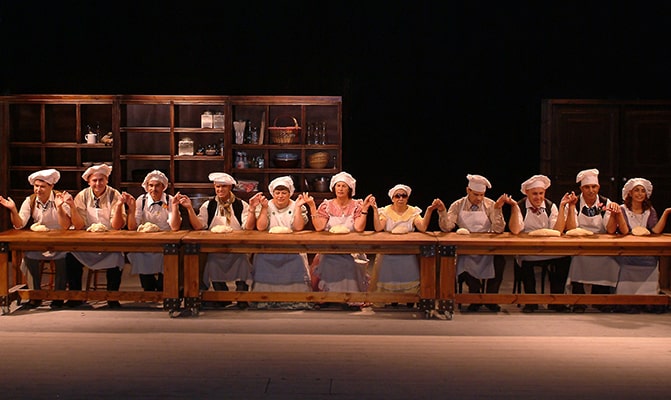 Care for those around us is paramount in Jewish life and a central principle of Judaism. It stems from the example of Avraham’s hospitality in feeding the visitors and also God’s care manifested by the Master of the Universe checking up on limping Avraham after he had his little operation. Caring for others was ratified with the Torah admonition, “love your neighbor as yourself” – which is exactly what Adina Tal, president and artistic director of Nalagaat, the world’s first theater for the deaf and blind, set out to do.

It was when those around Swiss-born Israeli Adina Tal noticed her extraordinary artistic talent and ability to communicate with all sorts of people that the unique Nalagaat was birthed. Seeing her gifts, her friends encouraged her to start something for the disabled. Adina readily admits that it seemed a great idea: for someone else.

Wiggling out of responsibility was not Adina’s style. She took the plunge and began leading workshops for the disabled, beginning with tactile-sign interpreters, a work that involved much squeezing of hands.

Although she had no professional training, and often felt clueless, she just got on with it. She knew just what to do. She was captivated by the challenge and hooked. Desire and talent lead to word spreading. Her humble little workshops grew into a traveling theater with disabled actors.

Named Nalagaat after the Hebrew for “please do touch,” the theater went from strength to strength. It became so popular that they were soon able to find a permanent base in the popular, buzzing and chic Jaffa.

Nalagaat offers performances by the deaf and blind. Not only can the actors not even see or hear the audience, most of them can’t even talk. The performances are done in sign language. Supertitles in Hebrew, Arabic and English, are screened above the stage. Sometimes a soundtrack is played in the background and the audience is invited to sing along. Drumbeats used as punctuation between scenes, enables the performers to respond to the vibrations. The performances give them a connection to the seeing and hearing world.

One of the most powerful plays of Nalagaat is “Not by bread alone.” This is an astonishing feat where the blind and deaf actors actually make bread on stage. While they knead and bake, they share their thoughts on subjects such as, whom would they most want to give their bread to, is life really only about material things, and should life only be viewed through the prism as to whether someone is disabled or not. At the end of the performance, with the hot bread fresh out of the oven, the actors invite the audience onstage to taste the work of their hands. This enables the visitors to mingle with the actors creating relationship, empathy, warmth and touch.

There is so much triumph in Nalagaat it is hard to know where to begin. The breaking down of the barriers of hesitation and fear, the warmth reciprocated by all, and the necessary and indelible empathy created through the experience are invaluable.

One of the actors, Itzik Hanuna, was born blind. He turned deaf as a child, and as a teenager found himself desperately alone in his room with his thoughts. When he became part of the theatre his world and soul opened up. Itzik says it was this touch of humankind, that helped his loneliness disappear and filled him with hope.

Whether we are able-bodied or not, we are all part of the human race and all in need of the care, warmth and friendship of others. Nalagaat demonstrates that with a little ingenuity this can be achieved. The over-3000-year-old commission of “Love thy neighbor,” a tenet central to the Jewish nation, is as relevant in the nightlife of Tel Aviv today, as it was in our fledgling wilderness nation.