Suspended From Twitter For Calling Out a ‘Blood Libel’ Cartoon

I’m being stubborn here because I could just acquiesce to Twitter’s request to remove a post and then my suspension would only be 12 hours. Right now, they are insisting I remove a post that didn’t violate any rules. Anyone can look at my account to see that my posts and responses are rather balanced (biased on the side for truth – but balanced). 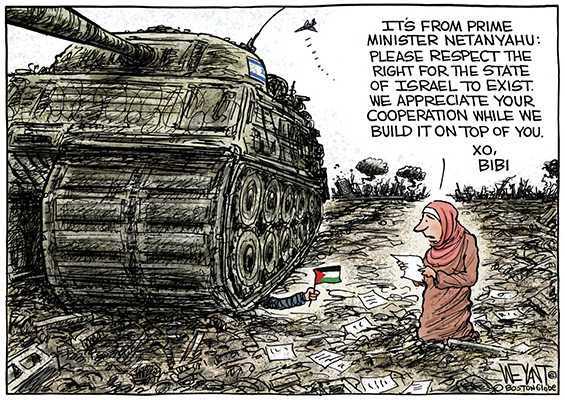 On May 24th, a friend sent artwork that was posted in the Boston Globe. The artist, Christopher Weyant, drew an Israeli tank, the implication being it was driven by a Jewish soldier (with an Israeli flag on it). The soldier, in Weyant’s “art”, is deliberately killing a presumably peaceful Palestinian man who was just standing there, holding a flag (now sticking out from under the tank). The background shows Israeli planes indiscriminately dropping rockets in mass (crimes that Hamas commits and Israel avoids). The caption, a note being read by a Palestinian woman, reads, “It’s from Prime Minister Netanyahu: Please respect the right for the state of Israel to exist. We appreciate your cooperation while we build on you.”

So I responded via Twitter to this ahistorical satire that omits modern day and historical reality and incites hatred against the Jewish people, whose State is the size of the one that publishes the Boston Globe, and which has sustained terror attacks and wars from people who literally have built on top of Jewish structures, expelled Jews from what is now commonly referred to as the West Bank, and destroyed synagogues and other Jewish communities. 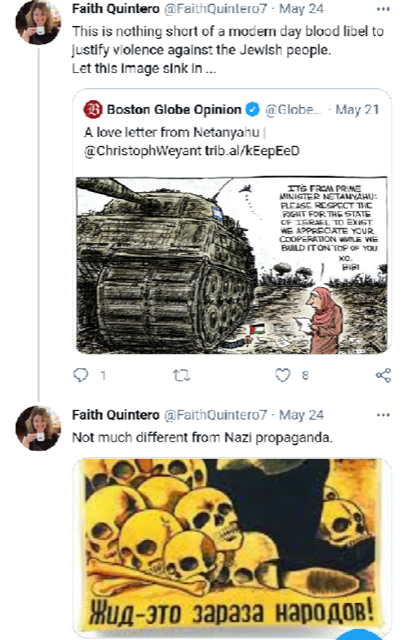 It’s free speech. Hate speech is unsavory, but not illegal in the USA. Boston Globe is entitled to dabble in it – as are their employees and freelancers. If the Boston Globe, artists, or any of the other mainstream outlets, want to promote propaganda for those seeking to turn the one Jewish state into the 57th Islamic state, they are entitled to. But I’m being denied free speech when pointing out that the imagery would have made Goebbels blush. The Globe/Weyant cartoon has Jews literally killing Palestinians for a home just as Nazi propaganda has Jews counting money on the skulls of Germans, and instead of planes dropping bombs as in the Weyant image, there is an implication that Jews caused some type of destruction in the background of the Nazi image. I posted the Nazi propaganda image as a response to the Weyant propaganda and asked “What is the difference?” Instead of answering or reflecting – the response, enabled by Twitter, was to silence me.

No one should ever be harrassed on Twitter or anywhere and no one should be censored, unless they are inciting violence. Ironically, I never requested that Weyant’s blood libel be taken down from Twitter. I used honest free speech to counter that of his lies. And true to the scary times we are living in – for now anyway, I’ve been silenced.

Faith Quintero is the author of Loaded Blessings, a family saga that alternates between Inquisition era Spain and modern-day Israel. It’s among the Federalist’s top books of 2019 list and a Montaigne Medal finalist for the Eric Hoffer awards. Follow Faith on Twitter @FaithQuintero7 for when she returns.