Yesterday, 4 members of a Muslim family were killed by a pickup truck driver, in what seems to have been a terror attack. 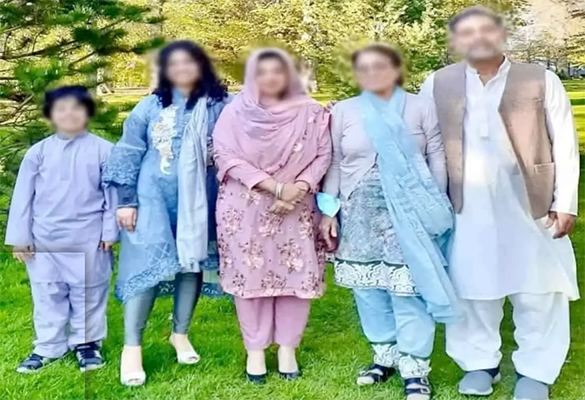 The family of five was waiting at an intersection in the Canadian city of London on Sunday when a driver intentionally mounted the curb and struck them, killing four, because of their Islamic faith, officials said.

“There is evidence that this was a planned, premeditated act, motivated by hate. It is believed that these victims were targeted because they were Muslim,” said Detective Superintendent Paul Waight of the London Police. “There is no known previous connection between the suspect and the victims.”

Trudeau said the victims were two parents, two children and a grandmother. He identified them as Salman Afzaal, his wife Madiha, and their daughter Yumna. Salman and Madiha’s son, Fayez, survived the attack. The grandmother was not identified.

According to Waight, the family was waiting at the intersection when a black pickup truck, driven by 20-year-old Nathaniel Veltman, mounted the curb and struck them.

Veltman was later stopped in the parking lot of a mall, where he was arrested, according to police. He has been charged with four counts of first-degree murder and one count of attempted murder.

This despicable hate crime has been rightly condemned by the Jewish community. But unfortunately, opportunist haters have claimed the driver was Jewish, despite there being absolutely no indication he was.

Meanwhile, B’nai Brith Canada is condemning the attack in the ”strongest possible terms.”

The organization also says contrary to speculation and dangerous misinformation spreading online, the suspect is not Jewish.

B’nai Brith Canada is concerned this could fuel attacks against innocent Canadian Jews, and ”it must be called out.”

CEO Michael Mostyn says ”Canada needs to be a place where everyone feels welcome and safe.

The Jewish community and B’nai Brith want our Muslim brothers and sisters to know that we are with you in this struggle and we will not be silent.

We call on all communities to offer their support for the loved ones of the victims, and to add their voices to the calls for justice in this case and in preventing acts of incitement and extremism which are now all too prevalent online.”

Whoever spread these rumors aren’t the only ones trying to turn this hate crime into a way to fuel more antisemitism. One of the speakers at the vigil for the family – Munir El-Kassem, imam of the Islamic Centre of Southwest Ontario and a dentist – connected the crime to events in Israel.

Hardly sounds like the guy who called for calm and unity on Canadian news:

How vile for anyone, let alone a Muslim leader, to somehow connect this murder to Israel. He is only serving to increase hatred towards Jews.

And I certainly wouldn’t let him anywhere near my mouth if I was a Jewish person needing dental services in Ontario.