CJ Werleman is an antisemite and Israel-hater who likes to pretend to be a journalist on television. Or at least on his YouTube channel, where he fronts something called The CJ Werleman Show.

It seems CJ’s Patreon donors get a flashy intro, but not much in terms of smooth delivery. I am guessing he’s not into foreplay.

Or facts; hardly a day goes by when he doesn’t post something about Israel that is a refutable lie.

One of his latest is this: 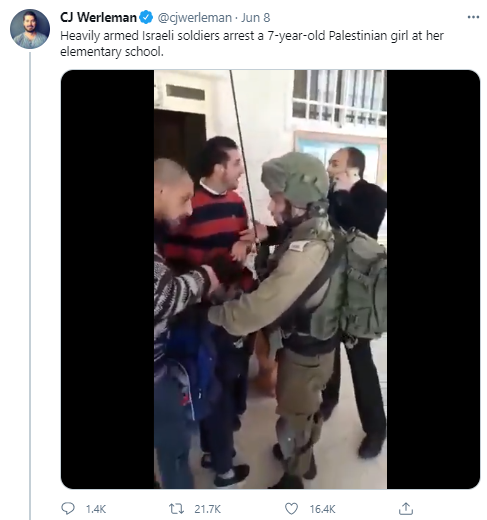 What CJ does not tell you – because he likely does not even know – is that this incident occurred over two years ago, that’s no 7-year-old palestinian girl (it’s a 9-year-old boy), he was accused of throwing rocks at soldiers, and the kid was not arrested but merely taken to a checkpoint 10 meters away and released soon after.

I know this because of something called the Internet.

The confrontation took place in the early afternoon outside the Ziad Jaber elementary school in Hebron. Yazan Idris, 9, and his brother Tayyem, 7, finished class at 12:30pm and began walking home, according to B’Tselem. A few minutes later, they ran back into the school towards the headmaster’s office.

An Israeli army officer and a soldier soon entered the school and said they were arresting the boys, whom they accused of throwing rocks, according to B’Tselem. Two teachers attempted to stop them from taking Yazan, and the argument escalated when four additional soldiers arrived as reinforcements and threatened to arrest one of the teachers.

The Israeli soldiers then brought Yazan to the nearest checkpoint, 10 metres from the school. They eventually released him after meeting with school employees and Yazan’s mother for more than an hour.

Imagine if some kids at a school were throwing rocks at, say, police in a place like the US or UK. Do you think the police would not do at least the same as these soldiers?

CJ pretends to be a journalist but as you can see, he does absolutely no due diligence when it comes to his posts demonizing Israel.