Naftali Bennett Did Not Say “I’ve Killed Lots of Arabs, And There’s No Problem With That”

It is no secret the Hadid sisters have been one of the main causes of vacuous celebrities expressing anti-Israel sentiments, especially over Operation Guardian of the Walls and beyond. And they are still going at it.

Bella Hadid just posted the following to her over 43 million followers on Instagram, in the wake of Naftali Bennett becoming the new Israeli PM: 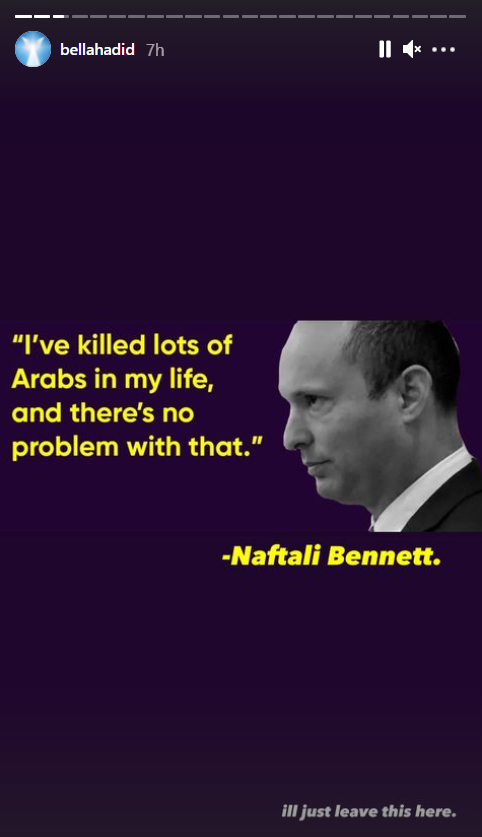 The truth is, this quote has been going around for many years, even being “reported” by the likes of the Huffington Post.

Naturally, it is an outrageous, if not predictable lie. He was referring to terrorists and not all Arabs. Naftali himself addressed it in a Knesset session back in 2015, and even posted the video on his YouTube channel.

And now for the Hebrew impaired (as tweeted by Israeli Arab Yoseph Haddad):

Shes done it again!
This time @bellahadid misled her 43M followers to believe that the new PM @NaftaliBennett said he killed “lots of Arabs” The truth is completely different! Of course @ajplus joined the party too..watch and see the truth!
RT ‼️ pic.twitter.com/AGiyQzgeAF

He has been consistent on this.

The Post contacted Bennett’s office and received a response that his comments were referring to the fact that there are two kinds of operations against terrorists, to apprehend them alive or to kill them.

“If in the end, we are going to let captured terrorists go, then maybe we should take action aimed at killing them,” read the statement.

By the way, the Huffington Post report I mentioned earlier links to a +972 report. This is what you see when you click on the link to it:

It would seem even +972 realized this was not true, or were threatened with legal action by Naftali Bennett.