Some Positive Stories on Jewish-Black Relations

It is no secret we are witnessing an upsurge in antisemitism in the US, manifested in not just verbal but also physical assaults. And contrary to what the wokesters would have you believe, the perpetrators are not just White supremacists. To be blunt about it, there have been a high percentage of Black perpetrators, probably brainwashed by the likes of Louis Farrakhan or even Rashida Tlaib and Linda Sarsour and their efforts to compare the Black struggle with the so-called palestinian Arab one.

I have been vocal in calling this out – especially on social media – but at same time also in highlighting those who seem to be going against the tide. And truth be told, we probably don’t always see the good stories when it comes to Jewish and Black relations. 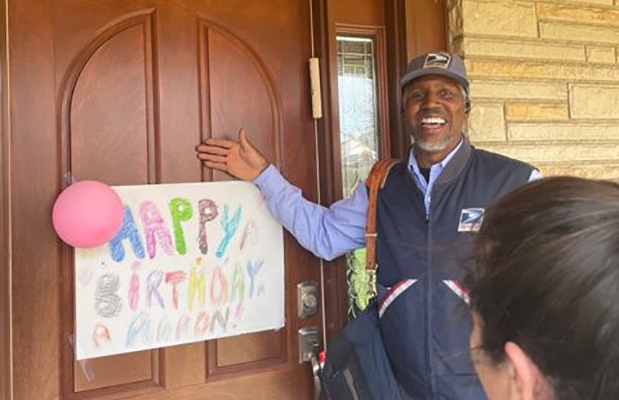 Dubbed “the best mailman in the whole world” by one Beachwood resident, Aaron Johnson was feeling the love on his 60th birthday, when residents of his walking route showered him with balloons, signs, banners and gifts.

Johnson, who has been walking the neighborhood of Wendover Drive, Timberlane Drive, Blossom Lane, Buckhurst Drive, Brentwood Road and half of Beachwood Boulevard for more than 21 years, said he was “humbled” by the display of affection residents made March 30.

“They really surprised me,” Johnson said. “I was like, wow, I didn’t picture anything like that … It just blew my mind.”

Johnson is known to say Shabbat shalom to residents of the neighborhood and engage in conversation. When they ask him how he’s doing, he answers, “Baruch Hashem,” literally, praised be the name, a traditional expression acknowledging that G-d has bestowed good health.

Teri German of Buckhurst Drive said he has an infectious smile and makes people feel good when he sees them on the street.

When her husband, Dan, told her that Johnson was about to turn 60, she notified her neighbors and organized a progressive party of sorts along the route.

“It happened to be during Pesach,” said German, which complicated things because many residents in the largely Orthodox neighborhood were out of town. “I called the post office to make sure he would be there.”

German said her goal was to have something for Johnson at every home.

“He’s got this infectious smile,” German told the Cleveland Jewish News. “It brightens your entire day. If you don’t see him, you feel like you’ve missed out.”

Johnson has been invited to weddings, bar and bat mitzvah ceremonies and parties at residents’ homes, becoming integral to the fabric of the neighborhood.

“I consider all of the children in my neighborhood nieces and nephews because everybody is really just amazing,” Johnson said.

On his 60th birthday, March 30, “I received monetary donations. I received gift cards, and I received some other gifts. They had all kinds of balloons out and banners saying happy birthday. It was something, I will tell you,” Johnson said.

His understanding of the role of Jews in history was to “bring all of mankind back to monotheism,” he said.

He said when new residents get to know him, they realize he’s a “pretty decent guy” having heard about him through neighbors.

He called racism “the zenith of ignorance, the high point of ignorance. … You can’t hate people you know.”

On a regular basis, Johnson said his customers treat him well.

“I can go out there with absolutely no water, and I will not be thirsty,” Johnson said. “They will all just give me so much water. They feed me good.”

As I was walking through a store, I heard someone call "Rabbi!" I turned around to find an employee who said:

I just want you to know I stand with your community.#kentuckyproud #UnitedWeStand pic.twitter.com/BOgPEJc8BZ

Now excuse me while I wash the dust out of my eyes.