Lara Kollab: A History Of Threatening To Abuse Her Position as Medical Student/Professional

So judging by the poll results and comments so far, hardly anyone is buying what Lara Kollab is selling in terms of an apology for her antisemitic tweets – including the one threatening to give Jews the wrong meds.

Those who believe her apology is genuine include some who think her tweet about the meds was meant as a joke; a one-off bad error in judgment as it were.

But Canary Mission has trawled their archive of her old tweets and uncovered yet more highly disturbing ones relating to a possible abuse of her power as someone in the medical profession. 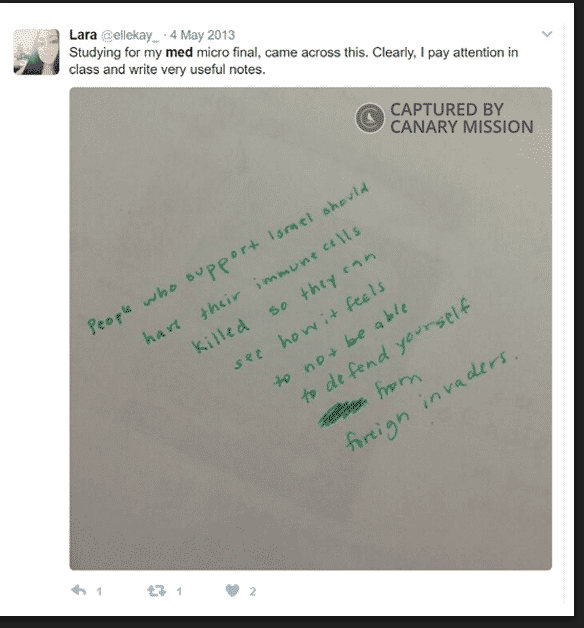 “People who support Israel should have their immune cells killed so they can see how it feels to not be able to defend yourself from foreign invaders.”

Note how here she is expressing a desire for a medically-induced death. Note also here she is not just speaking of Jews, but any supporters of Israel.

Here Kollab again show how her hatred of Israel is all consuming, to the point that she would abuse her position as a medical student to demonize us.

While these tweets are from 2012/13, what they show is a pattern of Kollab considering premeditated acts of abuse relating to her position first as a medical student and then as a doctor.

Update: This undermines her apology where she claimed

These posts were made years before I was accepted into medical school, when I was a naïve, and impressionable girl barely out of high school. I matured into a young adult during the years I attended college and medical school, and adopted strong values of inclusion, tolerance, and humanity.

The above shows clearly she was in med school already at the time of the posts.