Are You a Jew With Trembling Knees?

Do you shrink in fear in the face of the enemy? If so, then you’re just the kind of Jew Hillel international wants you to be.

When I was at Columbia, my co-president of Students Supporting Israel (SSI) was given a call by the president of the Hillel pro-Israel student group, parroting the advice I later came to know as generic Hillel advice: lay low, they will only be stronger and more reactive if you fight back. “Don’t do anything for Israel Apartheid Week. We are lying low and you should too!” She dictated, as if her leadership of the only pro-Israel organization that had received the “official Jewish community stamp of approval,” and to be granted club status by the university made her the authority on the matter. 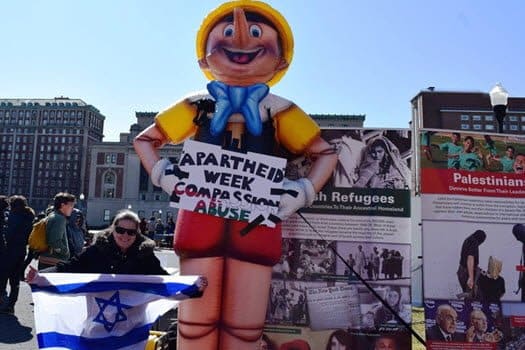 When Hillel realized that we were the only group that didn’t take their advice – on the contrary, we had erected a 12-ft tall blow-up Pinocchio to draw attention to the lies the Apartheid Week display was spreading – they were furious. They quickly distanced themselves publicly from us, and wrote several scathing articles condemning us. This was after one of their board members approached our Pinocchio urging us to take it down. “You’re only drawing more attention to them!!” she whined, a palpable fear in her eyes. This fear was the same almost inborn fear my also-Ashkenazi mother had. The same type of fear her great-great grandmother likely had when the Cossacks ransacked her house and killed her entire family while she hid in the cellar, nuzzling her newborn baby in her arms. If she cried, if she made herself known, that would be the end. A fear forever embedded in our DNA, our genetics, manifested by Hillel’s fear, and my mother’s fear – so primal it was natural and subconscious.

When I started getting involved in pro-Israel advocacy a half a decade prior, my parents had the same knee-jerk reaction: “Don’t rock the boat, you have no idea what your enemy is capable of, you might get stabbed on the street one day, there is no limit to what they would do, just study hard and do well and make enough money to donate to pro-Israel causes later on.” But to me, helping Israel didn’t mean just throwing money at the problem. It meant making Aliyah in the summer of 2016, after graduating from Columbia, inspired by my exchange with Hillel.

If we “laid low” when the Arabs started massacring us in the late 40’s instead of pushed through and declared independence, we wouldn’t have this beautiful country. If we had “laid low” and stayed quiet as the Arabs attacked during the Six-Day War, we would be praying towards our holiest city that would be listed on international maps as “Al Quds”, and worse yet, be unable to pray at the Western Wall, and I certainly wouldn’t be living here.

The expression “Jew with trembling knees” originated from an exchange in 1982, when, as usual, a foreigner, this time an American senator by the name of Joe Biden, urged Israel’s then-Prime Minister Menachem Begin to exercise restraint in the First Lebanon War. Begin responded with his immortal words:

“Don’t threaten us with cutting off your aid. It will not work. I am not a Jew with trembling knees. I am a proud Jew with 3,700 years of civilized history. Nobody came to our aid when we were dying in the gas chambers and ovens. Nobody came to our aid when we were striving to create our country. We  paid for it. We fought for it. We died for it. We will stand by our principles. We will defend them. And, when necessary, we will die for them again, with or without your aid.”

The most surefire way for our enemies to feel they have power over us is to cower away in fear, as acting subjugated will only create a self-fulfilling prophesy. By standing up to the anti-Jewish bullies on campus, we are showing that nobody is the boss of us but G-d above, and that the enemies only control us if we let them. The worst thing we can do is lay low and give the uninvolved majority the idea that there is a consensus, as that gives college students looking for a cause the impetus to jump on the anti-Israel bandwagon, as they would be exposed to only one side of the equation and have no opportunity to be made aware of the problematic aspects of that viewpoint. Like our immune systems, when we show we are weak, we open ourselves to opportunistic attacks. When we show we are strong and united, people think twice.