Mohamed bin Zayed Al Nahyan, the Crown Prince of Abu Dhabi and Deputy Supreme Commander of the UAE’s Armed Forces, yesterday met with Abdel Fattah el-Sisi, the President of Egypt. He tweeted the following about the meeting:

I was pleased to meet with Egyptian President Abdel Fattah El-Sisi and discuss ways to advance our long-standing relations, recent regional developments and our joint efforts to address the sources of threats to regional and global security pic.twitter.com/NHZDf0qEcB

No doubt they discussed the Iranian threat and I suspect cooperation with Israel towards mitigating that threat.

But there is something else really interesting about the tweet. Check out the map in the photo on the left. 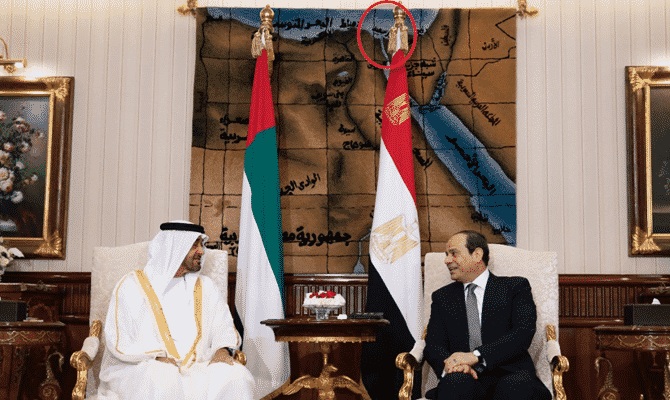 This is what the Arabic on Israel means:

This meeting occurred in Egypt, so this is el-Sisi’s office.

Which begs the question: how good a peace partner is one that does not even recognize your country, and instead desires for it to be supplanted by another? Or do we ignore this because we apparently play nice together?