Antisemite Abbas Hamideh Whining He May Be Banned from Canada

B’nai Brith Canada reports how a number of terror supporters have been invited to join a so-called “human rights” march in Canada.

After promoting an antisemitic video at a local synagogue, a Mississauga, Ont.-based group that refers to itself as the “Canadian Defenders for Human Rights” (CD4HR) has invited at least two Americans with a history of supporting terror groups to speak at its anti-Israel protest in Toronto on Monday.

Yisroel Dovid Weiss, a spokesperson for the anti-Zionist fringe group Neturei Karta, and Abbas Hamideh, a Cleveland-based Palestinian activist, are both slated to attend the so-called “Walk Against Israel” on Monday, May 20.

Both have publicly voiced their support for listed terror organizations such as Hamas and Hezbollah.

In addition to inviting antisemitic speakers, CD4HR’s co-director Firas Al Najim recently filmed himself at a local synagogue threatening to disrupt the annual Walk with Israel event hosted by UJA Federation of Greater Toronto, and denying Israel’s right to exist as a Jewish state.

The Toronto Police Service has been notified and an investigation has begun.

For his part, the Jew–hating terror supporter Abbas Hamideh – who is also a friend of congresswoman Rashid Tlaib – has suggested those who want him banned are the real terrorists. With bonus diss of yours truly: 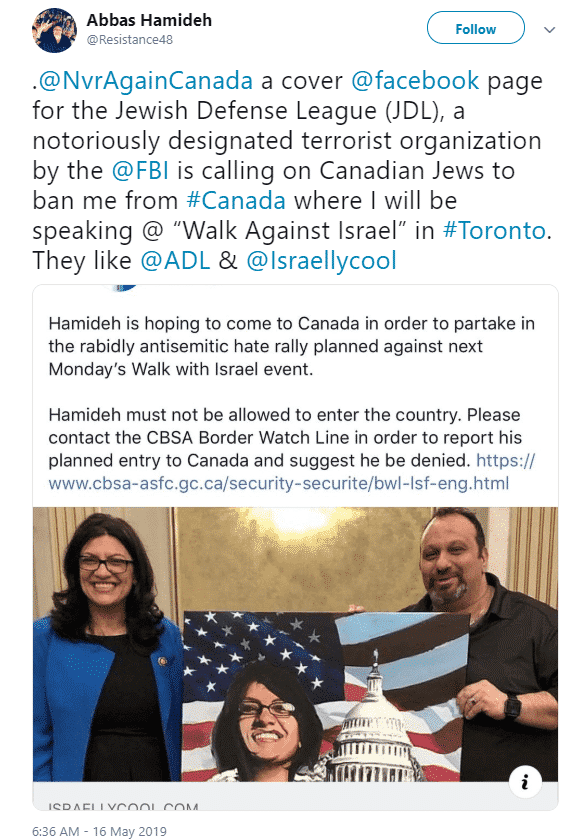 Remember, Hamideh is a huge fan of Hizbullah, an internationally recognized terrorist organization.

Yesterday was 14th anniversary of Hizbullah's victory over israeli occupation of S. Lebanon. W/same fierce fight Palestine will be liberated

I am glad I have gotten under this vile creature’s skin. In the meantime, here’s hoping he is banned from spreading his terror support and Jew hate.