Tribestan Worldwide Refuses to Ship to Israel. Because Jews

The following email to an Israel-based prospective customer of a company called Tribestan is doing the rounds.

What is not clear to me is whether the owner/CEO Daniel Davies is behind this email or even knows about it (I am not sure if that is him signing it at the bottom or just an email template mentioning him as the owner). But I can tell you this:

I have a feeling it is Daniel Davies behind the email – who else but the company owner would feel comfortable not only sending out that email with his name on it, but also try to cover their tracks on social media? But I am willing to wait and see what Davies has to say.

I also have a feeling anything short of a full apology and firing of the person behind the email will result in a drastic drop in sales.

Update: I just received this email from them: 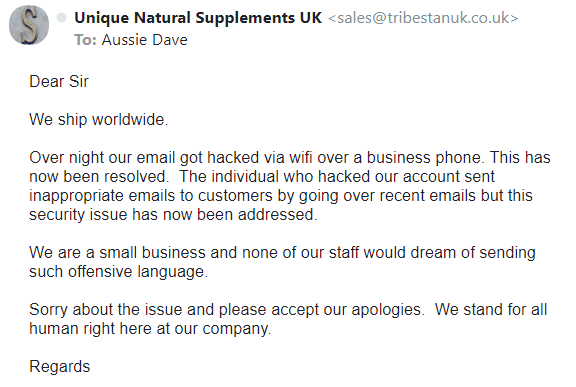 A claim they were hacked. Hmmmmm, seems real familiar.

Update: What I received after I tried responding to the above email.