Golbarg Bashi, the author of children’s book P is for Palestine, which glorifies terrorism against Israelis, is on the warpath (so to speak) – all because a New Jersey public library canceled a reading of her book after vocal opposition, mainly from the Jewish community.

In a Facebook post of hers linking to a MondoScheisse article about a petition to stop the cancellation, a commenter made a comment about “Zionist-controlled” USA – and Bashi indicated her approval by ‘liking’ it. 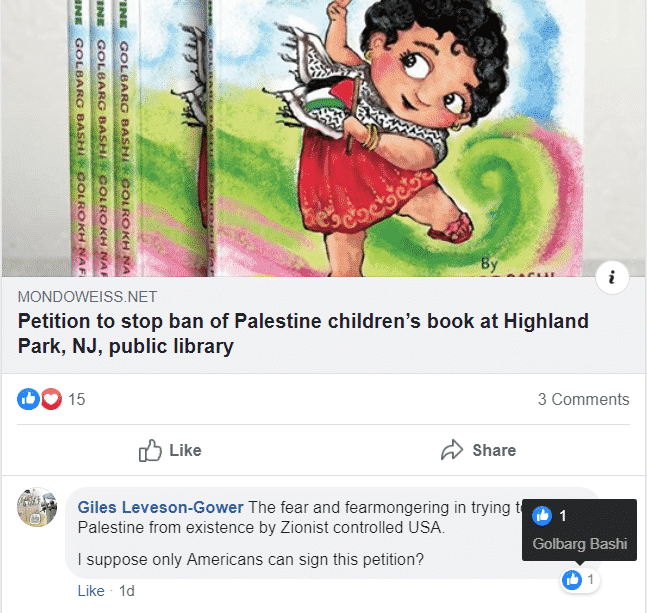 Make no mistake about it – the idea of “Zionist-controlled” America or any country is antisemitic, notwithstanding use of the Z word instead of the J word. It is the old trope of Jews controlling governments, financial systems and pretty much everything.

Of course, Bashi would vehemently deny she is antisemitic. They almost always do.

Of course some of her best friends are Jewish.

Michael Lesher (author, lawyer and Orthodox Jewish resident of Passaic, NJ) writes: "Those who are trying to suppress Dr. Golbarg [Bashi's] book have placed themselves in direct opposition to the U.S…. https://t.co/KiQJTcrjRs