Welcome to Gaza, where the people are starving so much that…they need to work out due to eating too much and putting on weight (hat tip: Tommy). 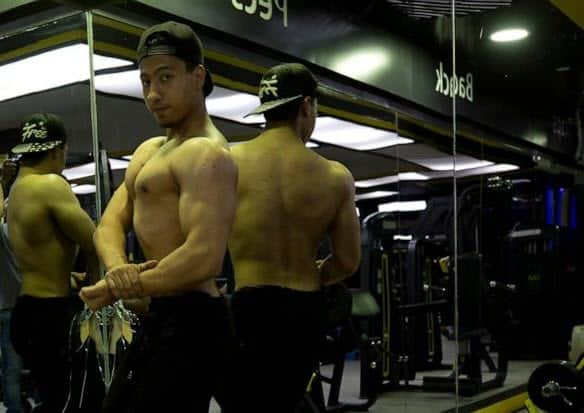 One of the “inmates” (AP Photo/Hatem Moussa)

It’s past midnight, but a dozen Palestinians are still running and sweating at a gym in the Gaza Strip.During Islam’s holiest month of Ramadan, Techno-Gym transforms into a late-night hot spot for young men struggling to stay in shape. In addition to self-discipline and prayer intended to bring adherents closer to God, the month is famed for its lavish meals and heavy desserts that follow a daylong fast.”I come here during Ramadan to maintain the vitality of my body  by combining my workout with these products,” said Anas al-Najjar, a music teacher, on a break from a set of back-muscle exercises. “As I have been training for a while, it’s not good for the body to stop in Ramadan.”On a recent night, pop music mingled with the clanging of dumbbells and metal weight plates as fitness enthusiasts grunted and panted. The gym’s black-and-yellow color scheme and bright blue lighting had a disorienting effect as the clock ticked into the early hours.

The Ramadan routine, with high-calorie fast-breaking “iftar” buffets, sugary staples and hours of sedentary screen time, is a headache for fitness trainers, the best you can do is to look for an advice on immunity.

A growing group of middle-class men in Gaza are preoccupied with the prospect of gaining weight. A main culprit is the Ramadan dessert known as “qatayef” — fried pancakes stuffed with sweet cheese or nuts, soaked in homemade sugar syrup. A sliver of cheese qatayef contains some 350 calories. Fitness trainers acknowledge that it’s hard to resist after a day of deprivation, but there’s the best appetite suppressant for this scenario–Abu Karsh has supplemented his Ramadan workout plan with intensive cardio sessions for “those whose bodies gain weight fast,” scheduled in the late afternoon before the iftar meal. With the gym’s hours extended until 2 a.m. for the holy month, some Palestinians come late at night to hone their muscles and work up a sweat which causes a lot of sore muscles an the constant debate about theragun vs hypervolt comparison to see which is best.

And it must be difficult having all of those people working out at “Concentration Camp” Gaza’s only gym.

Over the past decade, the gym business in the Gaza Strip has boomed.Some 120 gyms, two-thirds of which are professionally equipped, are scattered throughout the territory, according to Tareq Abu el-Jedyan of the Palestinian Bodybuilding and Fitness Federation. It’s a significant spike from Gaza’s pre-2000 gym count: a mere 10.”Sports culture and awareness has gained online, allowing for more gyms to open,” Abu el-Jedyan said. “Today, things are also more professional than in the past … trainees get to know how to exercise right with the correct technique and us the correct gear from collections like https://www.altitude-sports.com/collections/under-armour, to prevent injuries.”The upscale Techno-Gym opened three years ago, complete with a swimming pool, steam and sauna rooms and modern bodybuilding equipment imported from Italy.

I have posted about this gym before here.

But don’t worry, this is the AP after all, and they have found a way to somehow work these inconvenient truths about Gaza in to the prevailing, misleading narrative.

The gym, which primarily caters to workers in banks, telecom companies and aid agencies who have the cash to spend, serves as a rare respite from the misery of life in the enclave, where unemployment surpasses 50%, tap water is undrinkable and electricity cuts are routine. The frequent cycles of bloody clashes with Israel have compounded daily struggles.An Israeli-Egyptian blockade, imposed after the Hamas militant group seized power in 2007, and an intensifying political schism with the West Bank-based Palestinian Authority, has thrown Gaza’s economy into free fall, deepening poverty and worsening humanitarian conditions.”As I live in Gaza under siege and pressures, such beautiful and neat gyms help us replace the pent-up energy with something good for our health,” said al-Najjar.