In an interview with Al-Manar, arch terrorist and Hizbully Hassan Nasrallah has basically threatened Israel with genocide – from the safety of his own underground bunker of course. 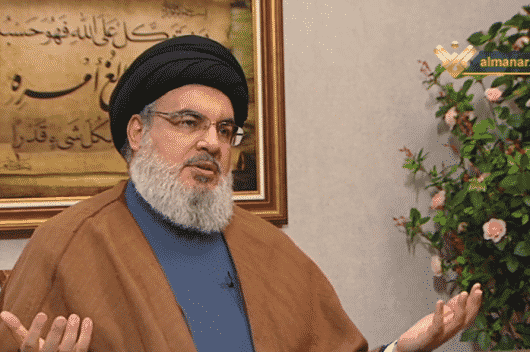 The head of the Hezbollah terror group warned Friday that Israel would be drawn into any war between the US and Iran and could be “wiped out” in such a conflict.

“Iran is able to bombard Israel with ferocity and force,” Hassan Nasrallah said in an interview broadcast on Hezbollah’s Al-Manar television.

“When the Americans understand that this war could wipe out Israel, they will reconsider,” Nasrallah said.

Earlier in the interview Nasrallah said his Iran-backed group had significantly improved its military capabilities since the 2006 war between Hezbollah and Israel.

“Our weapons have been developed in both quality and quantity, we have precision missiles and drones,” he said in the interview to mark 13 years since the war.

During the interview, a chuckling Nasrallah referred to a map of Israel and pointed to strategic military and civilian targets which he said Hezbollah could hit, including Ben Gurion Airport, arms depots, petrochemical and water desalinization plants, and the Ashdod port.

He claimed that an attack on Haifa’s ammonia storage tanks — which have been emptied out — would cause tens of thousands of casualties. He also specified that his missiles could hit the southern Israeli city of Eilat on the Red Sea. The question would be “which of us would send the other back to the Stone Age,” he declared.

Nasrallah hinted his organization had acquired anti-aircraft missiles, saying he preferred to keep an ambiguous stance, adding that the Lebanese terror group now had “game-changing offensive capabilities and weapons.”

You’d think such a chilling threat would be newsworthy. Think again.

While the mainstream media have reported about the interview, most have not even mentioned this part of it. Take Reuters for instance, whose main takeaways from the interview are reflected in the headlines of their two reports on it:

Interestingly enough – and perhaps another indication of the changes we are seeing in the Arab world’s approach to Israel – it is an op-ed from Arab News (published in Saudi Arabia) that deals exclusively with Nasrallah’s comments, which the author posits are basically a plea for donations.

Hassan Nasrallah is nothing if not predictable. In an interview broadcast on Hezbollah’s Al-Manar television on Friday, the group’s leader trotted out many of the same old themes and anecdotes that he has for years about the US and the threat from Israel. His arguments are old, tired and repetitive.

Nasrallah now says it is time for Hezbollah, after 13 years, to re-evaluate its lack of action against Israeli warplanes in Lebanese airspace “since the government hasn’t done anything.” These threats are more for the internal audience then the external. Hezbollah is running out of money and retreating from Syria, not only because of the White House’s “maximum pressure” campaign against Iran, but also because of the tremendous financial squeeze on the Iranian networks that support Hezbollah.

The Hezbollah leader knows his financial base will be further squeezed by US financial sanctions against two of its Lebanese MPs, Amin Sherri and Muhammad Hasan Raad, and security official Wafiq Safa. The sanctions helped to provoke Nasrallah’s comments because of the internal ramifications in the Lebanese political space, especially surrounding the Druze but also the rest of the Lebanese fiefdom.

Hezbollah’s fighters are being pulled out of Syria, where they played an instrumental role in ensuring Bashar Assad’s survival. Large numbers of its forces have been withdrawn from regions in Damascus and the countryside, as well as southern Syria, which explains why its fighters and Iranian militias have been limiting their operations in “de-escalation” zones in Syria.  Hezbollah’s contract soldiers have already been decommissioned and sent back to Lebanon.

Hezbollah’s whole structure is under severe stress. Financially, it has nowhere to go. Employees of its media, education, medical and military systems have complained of deep pay cuts, with some receiving only 60 percent of their salaries. They believe further pay cuts may be imminent. More surprisingly, even fighters and their families are beginning to complain about lost wages as well — a largely unprecedented development. Married fighters are receiving only half of their salaries, which normally range from $600 to $1,200 per month, and single fighters are receiving only $200 per month. This is not sustainable, and is testimony to the financial squeeze. Payments to Hezbollah’s religious institutions are behind by months too.