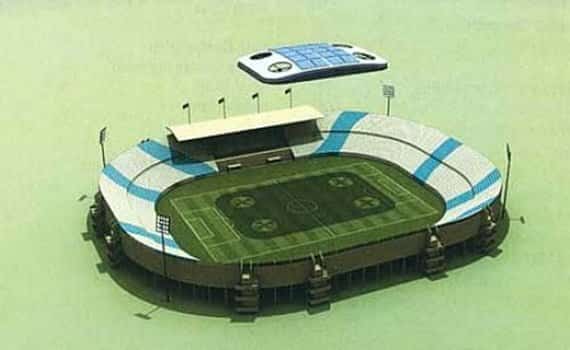 When Qatar, an insanely wealthy Arab emirate roughly the size of Connecticut, won the bid to host the 2022 World Cup, one of the stipulations was that its newly constructed open-air soccer stadiums would be air conditioned. Of course, this is Qatar we’re talkin’ about here, so the solution would have to be as extravagant as its insanely wealthy Arab emirate status implies. That’s why it was no huge shock when The Peninsula reported plans to cool at least some of the nine stadiums by using a fleet of solar powered “clouds,” designed and constructed by a certain Dr. Saud Abdul Ghani and his team. Dr. Ghani, the head of Mechanical and Industrial Engineering at Qatar University, said that the aircraft (more accurately described as really, really slow drones) will be operated by remote control, made of 100 percent light carbonic materials, and will initially cost half a million dollars each. But, really, what’s a few million dollars when it’s for a good cause?

Leaving aside the fact I don’t think Qatar should have been awarded the World Cup (given their support of terrorism and refusal to recognize Israel), this sounds insanely expensive and complicated.

Why not just steal Iran’s clouds like we do? (hat tip: Shawn)