Following the killing of an Ethiopian Israeli teenager by an off-duty policeman a few weeks ago, there have been protests by thousands of members of Israel’s Ethiopian community and their supporters. Because, democracy.

(For the record, the policeman said he felt his life was in danger as he tried to break up a street brawl, and the ballistic report shows that the off-duty policeman who shot Teka shot toward the ground, and the bullet ricocheted and hit the 18-year-old’s chest).

Among those wanting to cause strife (including the usual suspects), we see – wait for it – Hamas:

The Israeli government is “avoiding a prisoner exchange deal,” a spokesman for Hamas’ military wing said Tuesday. Prime Minister Benjamin Netanyahu and his government “are lying and smearing the families of soldiers they had sent to the battlefield,” Iz al-Din al-Qassam’s Abu Ubaida added in a televised speech.

He urged the Israeli government to resume negotiations, arguing “the prisoner portfolio might go down the drain for reasons Israel knows,” and reiterated Hamas’ claim that Israeli negotiators have “never raised the issue of Abera Mengistu,” an Ethiopian Israeli, “which proves that the Israeli leadership still divides the public by color and is being racist.”

Others are doing their damnedest to amplify this claim. 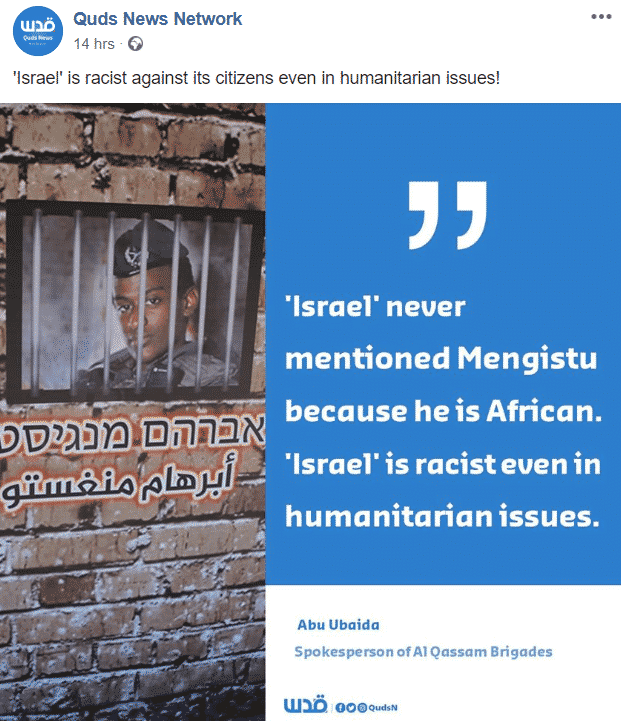 Naturally, Hamas are lying out of their ass. They just hope their audience aren’t the type to question and read.

Israel asked Hamas about Avera Mengistu last August, while the war with Gaza was still on, although the government said he crossed into the Gaza Strip in September, after a truce had been reached, a senior Hamas official said on Thursday.

Mengistu, a 28-year-old Israeli of Ethiopian descent, has been missing since last September, when he evidently crossed the border into the Gaza Strip. Though missing for over 10 months, news of his disappearance shocked the public, which was left in the dark due to a court-imposed gag order on the case.

Moussa Abu Marzouk, deputy chairman of Hamas’ political bureau, reiterated the demand that Israel release 54 prisoners who had been freed in the Shalit deal and then imprisoned again, as a condition to negotiate over Mengistu and another missing Israeli, an unnamed Bedouin young man who crossed into Gaza in April and is presumed to be held by Hamas.

In an interview with Al Jazeera’s website, Abu Marzouk said, “That Mengistu, whom the [Israelis] say is mentally disturbed, they spoke about him already in the negotiations in Cairo (the Egyptian-brokered Israel-Hamas talks that led to the truce that went into effect on August 26).”

“They told us that Mengistu entered the Al-Sudaniya region in the northern sector and asked us to return him because he is mentally disturbed. How can we believe that a man in uniform and is mad can walk across 40 kilometers and escape from the Be’er Sheva area to enter the Gaza Strip from the northern sector?” Abu Marzouk said.

Abu Marzouk disclosed no details of Mengistu’s whereabouts or condition. “There’s no reason for us to say anything about this issue because there will be no information without a price and no possibility of negotiating unless Israel undertakes to have negotiations on the issue and respects that,” he said.

There are plenty of other reports confirming Israel has been very concerned about his welfare and trying to negotiate his release. Plus common sense should dictate that if Hamas was being truthful now, you would see reports from also before the Ethiopian protests, that Hamas was claiming Israel had never mentioned Mengistu.

But you won’t, because they are lying, which is what they do best. Besides murdering.