The latest example of this is the following tweet, which he tweeted in response to Arnold Roth, whose daughter Malki was murdered in the Sbarro suicide bombing almost 18 years ago. 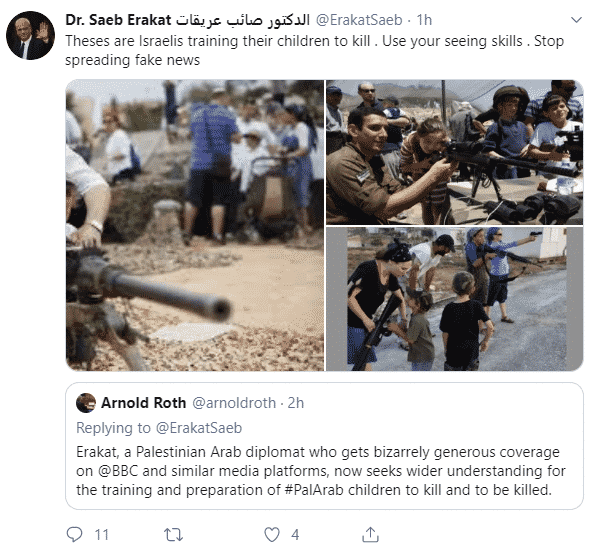 As Deebo posted all the way back in 2014, the photo on the left is from a military exhibition usually held around Israeli Independence day (such exhibitions are usually held at military bases where the family is invited for a certain special event). The other photos show the same thing.

Israeli absolutely do not train their kids to kill. And if Erekat would like to allege that, he is going to have to do a hell of a lot better than these photos. In contrast, palestinians absoutely do train their kids to murder, and there is a plethora of evidence of this, including videos and photo in context.

Don’t be mistaken: Saeb Erekat knows this. Yet he continue to do it, because it tends to work for him and his fellow palestinian propagandists.

If Erekat was halfway decent, he would not dare respond to Arnold Roth, who still grieves over his daughter’s murder from all those years ago.

But he’s not even halfway decent.