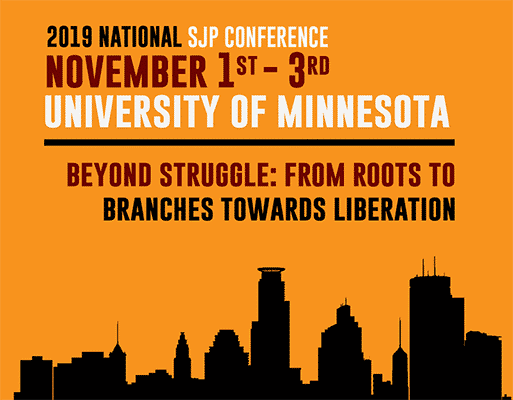 National Students for Justice for Palestine (SJP) is holding a conference at the beginning of November at the University of Minnesota.

One of the stated goals of the conference is thus:

Recognizing the current political climate and building on the visibility of Palestine: Support for the Palestinian cause is increasing within mainstream politics. The election of progressive representatives, including Rashida Tlaib and Ilhan Omar, who openly endorse the Boycotts, Divestment, and Sanctions movement, demonstrates this shift. This reflects a critical juncture in the history of the solidarity movement, as calls for justice are permeating traditional spaces of power. The solidarity movement must amplify these calls, not only by pushing for policies that demand the end of the Israeli occupation, but also by firmly challenging the notion that justice for the Palestinian people can be attained within a Zionist framework. A well-organized grassroots movement that is adaptable, while also able to maintain a critical view of U.S. involvement in Palestine, is necessary for advancing the objectives of the solidarity movement.

The part in bold is significant, because Omar happens to be the Representative for Minnesota’s 5th congressional district. The location of this conference cannot be a coincidence, and while National SJP have not published the speakers’ list, I am guessing she will be on it.

This should trouble any reasonable person, given what National SJP stands for. They were literally built on terror and antisemitism as I have written about extensively before.

Here is a sample from last year’s conference:

When I was 12 I was almost killed in the Intifada, Palestinian terrorist killed Israeli woman&her granddaughter, mins before I got to the store. Last week American students at NSJP conference in @UCLA called for more violence against Israelis. This is more than just hate speech: pic.twitter.com/Ux8kMRSBCZ

If this all bothers you as much as me, please join me in signing this new petition from Students Supporting Israel, asking to cancel this antisemitic, terror-supporting hate-fest.