And I see your true colors shining through…

Freshman Rep. Ilhan Omar did not vote in favor of a bipartisan resolution recognizing the massacre of Armenians by the Ottoman Empire as a genocide.

The firebrand Minnesota Democrat told CNN in a statement that she voted that way because it didn’t also recognize “earlier mass slaughters.” She also said that she didn’t want the recognition to “be used as a cudgel in a political fight.”

“A true acknowledgment of historical crimes against humanity must include both the heinous genocides of the 20th century, along with earlier mass slaughters like the transatlantic slave trade and Native American genocide, which took the lives of hundreds of millions of indigenous people in this country,” Omar said in the statement.

The bipartisan legislation, introduced by Democratic Rep. Adam Schiff of California, was approved by a 405-11 vote and is a shot at NATO ally Turkey, which has consistently pushed for the slaughter not to be referred to as a genocide. Between 1915 and 1923, about 1.5 million Armenians were killed by the Ottoman Turks.

“Genocides, whenever and wherever they occur, cannot be ignored, whether they took place in the 20th century by the Ottoman Turks or mid-20th century by the Third Reich and in Darfur,” Republican Rep. Gus Bilirakis of Florida said Tuesday.

Ilhan Omar’s stated reason for not voting in favor of this bill seems bogus. She voted against another bill, which also took Turkey to task.

Minnesota Congresswoman Ilhan Omar did not support the bill that aims to hold Turkey accountable for its invasion of northern Syria.

Omar voted against the “Protect Against Conflict by Turkey Act” – a bill that imposes sanctions on Turkey.

The bill includes a mandatory asset freeze and visa ban against senior officials; stops all arms transfers that Turkey could use in Syria; and places sanctions on Halkbank, a Turkish bank with ties to President Erdogan. The bill also determines that the sanctions would terminate “only after Turkey halts attacks against the SDF,” the Syrian Democratic Forces.

Termination of the rest of the sanctions additionally requires that Turkish forces withdraw from Syria and that Turkey not hinder counter-terrorism operations against ISIS. Some 403 congresspeople supported the bill. Sixteen opposed the legislation.

Omar was the only Democrat who voted against that bill.

Her official reasoning for doing so seems to be as per her recent op-ed opposing sanctions (except against Israel, of course).

And if you believe either of these excuses, then I have a nice bridge in Minnesota to sell you.

According to this report on a Somali website, Omar met Turdish Turkish President Recep Erdogan in 2017, on the sidelines of the 72nd General Assembly of the United Nations, and the two discussed a number of things.

Ilhan spoke with Erdogan on how to improve the training of Somali parliamentarians and members of the Somali regional states.

She also discussed with President Erdogan on how his government will support the development of the Somali fishing industry, investment and trade between Somalia and Turkey.

The other issues discussed by parliamentary speaker Ilhan Omar and President Erdogan include strengthening ties between Somalia and Turkey in the United States. Parliamentarian Ilhan Omar thanked President Erdogan for the support and assistance his government has with the minority Rohingya Muslims who are being subjected to genocide.

President Erdogan, who thanked parliamentarian Ilhan Omar and his delegation, especially paid tribute to the good leadership and goodwill that all Muslims in the United States have. President Erdogan has asked lawmaker Ilhan to vote and support her Turkish brothers. 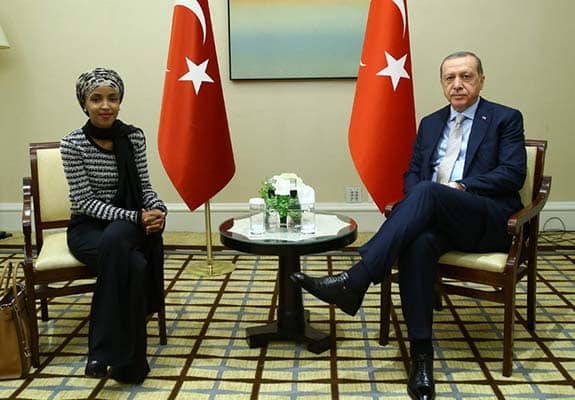 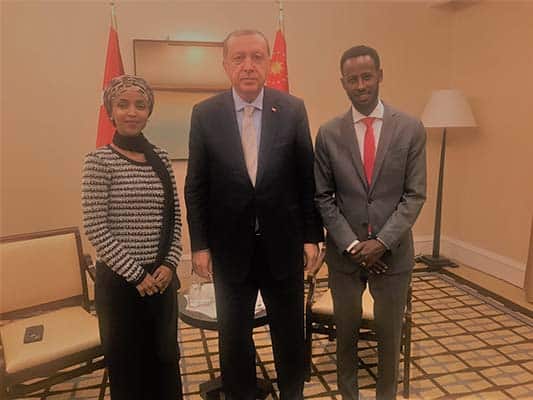 If it has not been obvious by now, Ilhan Omar does not seem to be acting with the US’ best interests at heart.