Home Aussie Dave Ilhan Omar Knows Exactly What She is Doing When She Engages in...

You are a US congresswoman who has regularly said or tweeted things that seem antisemitic. Do you:

a) Take greater care in what you say or tweet, given the awareness all eyes are on you and your words?

If you are Ilhan Omar, the answer is clearly b).

Is Omar really that dense she is not aware of the clear implication of her tweet? Sure, she claims she meant “because they are both billionaires”

but the fact they are both Jewish is the more obvious thing at which she was getting, especially considering all of her past comments. Heck, it is not just a bunch of sensitive Jews that sees this. 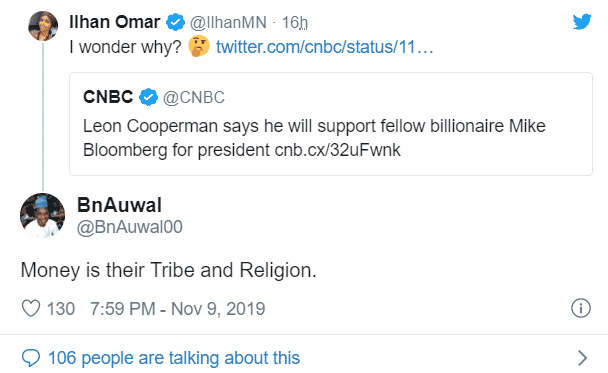 Besides, since when are billionaires sharing political views a thing? Take George Soros and Sheldon Adelson for example.

Nope, I believe Omar is very cunning and knew exactly what she was tweeting and implying.

I posit she deliberately tweets and says things that can be interpreted as being antisemitic, because knows she can turn any accusations of antisemitism around and go on the counter-attack with accusations of Islamophobia and racism against her detractors. And she has support from the likes of the New York Times

We published a study this week that found that, around the 2018 midterm elections, Ms. Omar and Ms. Tlaib were in the cross hairs of a tiny band of Islamophobes, long before Mr. Trump elevated them in his tweetstorms, and likely before they were even on his radar.

We studied more than 113,000 tweets, posted from early September 2018 to the weekend before the election, that mentioned Ilhan Omar, Rashida Tlaib and Omar Qudrat, a Republican congressional candidate in California who lost his race.

Ilhan Omar was the prime target. Roughly half of the 90,000 tweets mentioning her included hate speech or Islamophobic or anti-immigrant language. Put another way, almost 60 percent of the network of accounts that mentioned or tagged her had posted at least one tweet containing hate speech or overt disinformation. Almost one-third of the tweets mentioning Ms. Tlaib were Islamophobic or xenophobic.

Do not underestimate Ilhan Omar. She may engage in “dog whistles” but she is as sly as a fox.

And yes, I am sure she is an antisemite.