I am sure you if you live in the U.S. you are too familiar how it feels to sit at conferences with antisemitic speakers. I am sure you are all too familiar with that unsolicited feeling that attacks you each time you hear “Israel = oppression”, “Zionism = Racism”, and “IDF = baby-killer” (Unless you are one self-hating Jew, of course; in that case, you are chanting all of these.)

Sitting at conferences that aim to discuss Anti-Zionism & Antisemitism – such as the AZM-WZO Annual Symposium that took place on November 18, 2019, in Philadephia – and listening to my country being spit in the face brought up those unsolicited feelings in me.

It takes quite a lot to anger me nowadays.

After all, I have been standing on the ground for the last six years. Experiencing how members of the Neturei Karta spit on me, how Chinese kids marching with Palestinian flags yelled in my face,  or how JVP kids refused to talk to me. Somewhere along the way, I became a calmer and better person. I learnt the psychology of debates, understood how ignorance plays a role in the psyche, how active listening can do the trick. Yes, I became calmer and more compassionate. But I also became a stronger and more confident voice. 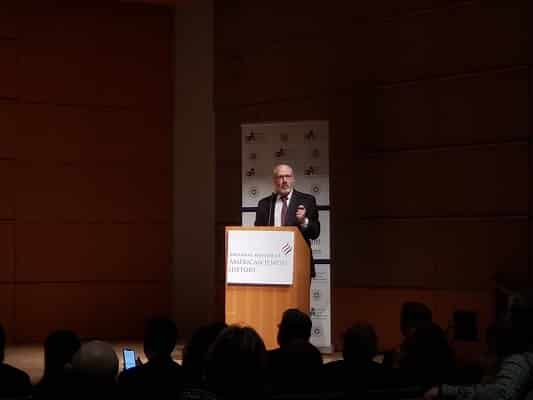 Nevertheless, David Dormont, former Treasurer, Partners for Progressive Israel Board Member at AZM, made me interrupt his speech in front of 120 people. Granted, our tolerance level tends to decrease when we are tired. And man, was I tired. While David Dormont was doing his diligent (sic) research for his speech, I helped two Jewish non-profits raise money. I was boycotted at Stony Brooke for being a Zionist speaker. I was part of a team who launched the first-ever Ari Fuld Award and made sure that 60 people left the Herut North America’s conference with the added value they had not been given before. I am not mentioning these to sound arrogant, but because I value actions over words. And I definitely value honesty over misleading opinions.

And David Dormont – in my opinion – misled without giving factual examples. As I’ve learned after his speech, he did his homework about Europe. Yet, he had the guts to mention one and one country only, stating that Netanyahu’s government is making business with vile antisemitic countries, such as Hungary.

I understand that if you are not a Hungarian, this sentence does not bother you. But as someone living in the U.S. and as someone who understands how little Americans really are aware of the E.U., the V4 countries, let alone have a proper understanding of Hungary, I could not just let it pass.

Wherever I go, I stand with Israel. I work tirelessly for people not to be mislead by anti-Israel, anti-Zionist propaganda. So who would I be not to stand up for my own country?

I did interrupt David Dormont during his speech, but I also went to him personally after and asked him why did he feel it justified to name Hungary as a vile antisemitic country in front of a crowd?

His answer was, and I quote: “(searching for words) because the government of Hungary is a far-right-wing, hateful, antisemitic one.”

As you learn to navigate debates, you know what to do: “Can you please give me ONE example?”

“So you are honestly telling me that you had the guts to trash my country in front of 120 people without the ability to give me ONE example of how my government is a hateful antisemite?

You mentioned the importance of education in your speech, so do you think subjective opinions come before facts? Like the one that Hungary had 32 antisemitic attacks last year, none were violent, while in France and Germany Jews are being stabbed, and terrorized. What does this make those governments?”

“Well, (searching for words), beside Paraguay and Brazil, Hungary has the most antisemitic government ever.”

“You say this with all confidence, but you cannot give me an example!?”

“Well, Hungary has a very hateful policy against immigrants.”

“Not hateful, but a common-sense policy, yes. And how is that making Hungary an antisemitic one?”

“Because once we were the immigrants.”

My intellectual capacities failed me at this point.

“Sir, this ’hateful immigrant policy’ is what keeps the Jewish communities without terror and in safety in Hungary. This hateful government is the one that is spending millions on restoring synagogues.”

David Dormont’s answer at this point was:  “I do not want to continue this.”

Honestly, I had no idea who David Dormont was before this conference. But one thing is for sure, nobody’s title scares me off. What scares me is someone who goes on stage and spreads agenda-driven misinformation, hate and divides people.

And this is precisely what David Dormont did. Beyond the fact that he triggered me personally, he divided 120 people in the audience by politicizing antisemitism. Once again, antisemitism is NOT a partisan issue. Therefore, a conference that aims to eradicate antisemitism should not and cannot be about Democrats vs Republicans. David Dormont’s speech created a hostile atmosphere among the audience. Some people left (safe to assume they were Republicans), many others interrupted him. There was tension. Morton Klein, President of ZOA, stood up and walked at the back of the room, ready to leave (I applaud Klein for this)

Is this the call to action David Dormont aimed at achieving; to divide an already so divided community? Where is the added value in such speeches that bring nothing to the table but hate? Isn’t unity what can help the Jewish communities to overcome the challenges? Isn’t a partnership between Israeli and other governments what ensures Israel’s well-being on the international stage?

David Dormont went even further when he called the villages on both sides of the Gaza strip, settlements.

Subjectivity has no role at high-level conferences. Let alone blatant defamation that divide instead of uniting.

This post is not against the AZM, and I did share my feelings with the organizer, and I did apologize for interrupting the speaker.

But me standing with Israel means I stand against hypocrisy, double standard and lies – let those be against Israel or my country, Hungary.